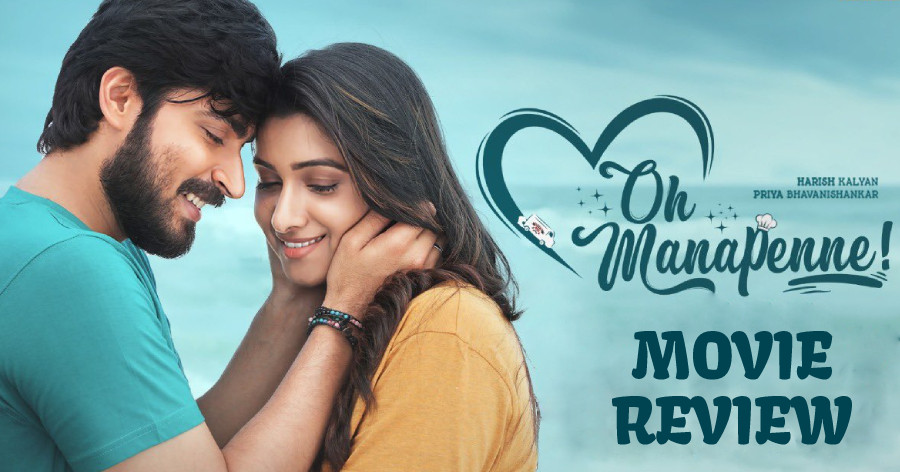 Harish Kalyan and Priya Bhavani Shankar's Oh Mana Penne, directed by Kaarthikk Sundar, is the official Tamil remake of the super hit critically acclaimed Telugu film, Pelli Choopulu. Oh Mana Penne is the latest direct OTT release film that has come out on the Disney Hotstar platform. Has Oh Mana Penne passed the litmus test? Here is what you need to know!

STORY:
Karthik (Harish Kalyan) is a carefree jobless man who agrees to get married so that he can comfortably settle in life with the dowry money that he will get. Shruthi (Priya Bhavani Shankar), on the other hand, is a Gold Medalist in academics, who wants to pursue her higher studies in Australia. These two contrasting individuals - Karthik and Shruthi, along with their families meet for the matchmaking ceremony and during the occasion, Karthik and Shruthi get to talk about their likes and dislikes on various topics. However, the occasion stops midway due to an unexpected twist. Later, they decide to team up on professional grounds as business partners.  What was the fate of Karthik and Shruthi and how did their business journey progress forms the crux of Oh Mana Penne.

SCREENPLAY, DIALOGUES, & DIRECTION:
Debut director Kaarthikk Sundar must be appreciated for not making Oh Mana Penne a frame-to-frame remake. He has taken the original story, made a few minor alterations to the screenplay and has executed the film in a refreshing manner. Oh Mana Penne has a fair level of freshness in its presentation and that is beautifully supplemented by the fantastic performances from the lead actors. The writing is neat and precise, keeping the proceedings short and sweet. There's a certain level of breeziness and light-heartedness in the film and the mood has been maintained for the majority of the runtime.

The emotions don't go overboard and due credits to the team for packing it in the right proportions. Deepak Sundarrajan's dialogues are perfect in balancing the humour and drama quotients and it is one of the admirable aspects of the film. There are enjoyable contemporary references of the popular characters played by the lead actors in this film and they blend neatly with the course of the film. The humour portions work really well and it comes as a saviour whenever the screenplay faces a dip.

On the flip side, it would've been more effective if the conflict between Karthik and Shruthi was more impactful. Also, the love track between Shruthi and her ex-lover Arjun doesn't click well. However, on a larger picture, these points don't come as complainable limitations.

CAST:
Harish Kalyan and Priya Bhavani Shankar hold the film together with their naturally impressive performances and the duo's chemistry is beautiful to watch. Priya looks pretty on screen and manages to leave a solid impression with her performance. Harish Kalyan is also effective in a role that comes a full circle. The duo's casting equation works in the favour of the film and it is their togetherness that makes Oh Mana Penne a likeable affair. Anbu Thasan and Abishek Kumar, as Harish's friends are highly enjoyable in their respective roles, with especially Anbu's counters instantly helping in some laughs.

Venu Arvind is another delight in the star cast of Oh Mana Penne. Whenever he's there in a scene, he lightens it up with his performance and body language and many youngsters would relate his character to their fathers. Ashwin Kumar, in the limited screen time, does his part well, but it would have been really good if he had dubbed for his character, considering the fact that the audience now knows him. Tharani, in a short and sweet role as an RJ/friend, is likeable. Oh Mana Penne sparkles in bright colours with regards to the casting.

TECHNICAL:
Vishal Chandrasekhar's music is apt, delivering the right kind of emotions. The music blends so well with the course of the film acting as a good support system. Krishnan Vasant's compositions look neat, while the colours and lighting pattern add more breeziness and warmth to the film. Kripakaran's edit is crisp and effective, helping with the smooth flow of the movie.

SO?
Oh Mana Penne is a well made feel-good romantic drama that does justice to the original version!