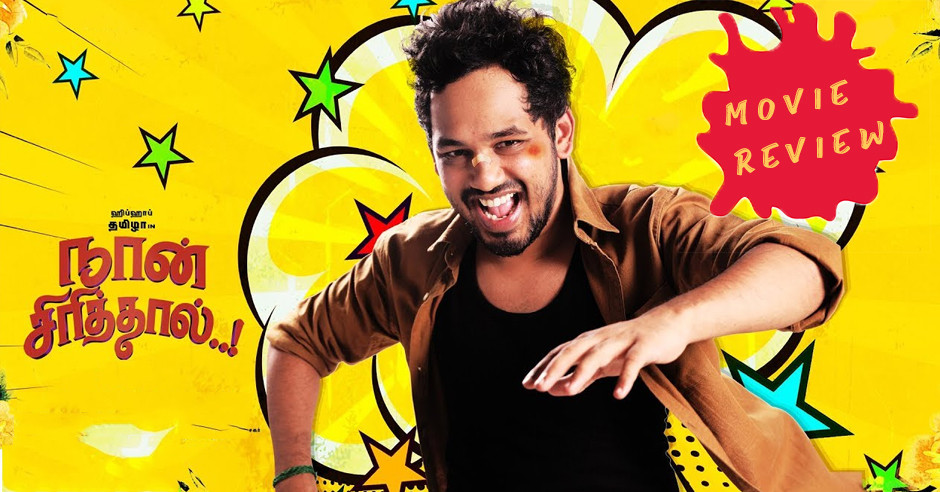 After two successive hits, Hip Hop Tamizha is back with yet another fun filled comedy entertainer Naan Sirithal. The trailer has already created a good expectation for the film despite the promotions being very minimal. Naan Sirithal is an extended version of a short film titled Keka Beka Keka Beka. When you stretch a 30-minute long short film to a feature film, you will need some strong sub plots to keep the audience engaged. The director has neatly twined the core subject with a gangster angle but the overall product looks superficial with the screenplay being a little wayward.

Hip Hop Tamizha does nothing but laugh throughout the film, because that’s how his character has been sketched. He constantly lets the supporting actors do the talking and has no bones in letting them score. Occasionally, there is a mass scene where Adhi walks to a power packed musical score in the background that keeps his fans hooked. But his acting skills have not been tested here. It looks like Ishwarya Menon still hasn’t come out of the Tamizh Padam 2 hangover. She has been asked to walk in three songs and that’s how much her contribution to Naan Sirithal is.

Sha Ra and Munishkanth as dumb gangsters do no good to the script, with a few lacklustre comedies. Badava Gopi and Ravi Mariya evoke laughter at times. Dearth of enjoyable comedy scenes is the major letdown factor in Naan Sirithal. It has a good vibe, some glossy visuals and foot tapping tunes but comedies just don’t work even through the script itself gives so much scope for humour. Too many force fitted comedy scenes will annoy a few but might even appeal to the masses who are ok with watching harmless, no logic humour. The emotional scenes look hurried and ineffective. A social message towards the end will take you by surprise because you wouldn’t see it coming.

Hiphop Tamizha elevates the energy with his pulsating background score. However, in the emotional scenes, the work could have been even better. The songs like 'Break Up', the title track and 'Ajukku Gumukku' uplift the audiences' mood in the theatre. Vanchinathan’s visuals are a valuable asset and the light work comes in handy. The rich colour palette filled with the blue tone mostly supplements the mood setting of the film. Sreejith’s editing is crisp and dynamic. The film on the whole loses its momentum in the second half.

Verdict: Naan Sirithal entertains at places, but a wayward screenplay and comedies that are enjoyable only occasionally spoils the fun!