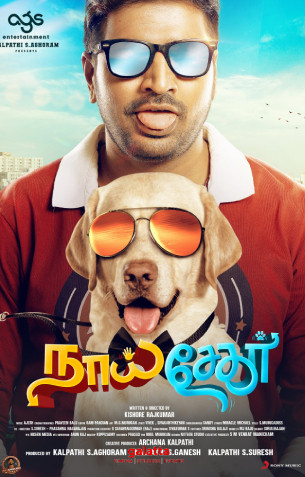 Comedy actor Sathish has turned a lead actor with Naai Sekar which has hit the screens today. The film is directed by debutant Kishore Rajkumar and has Cook with Comali fame Pavithra Lakshmi playing the female lead.

STORY:
Because of a scientific experiment by scientist Rangarajan (George Maryam), the DNAs of Sekar (Sathish) and Padayappa (Labrador Dog) get exchanged. Sekar becomes Naai Sekar, doing all kinds of dog activities and the dog starts to behave as a human. Did Sekar and Padayappa reverse back to their original roles form the crux of Naai Sekar.

SCREENPLAY, DIALOGUES, & DIRECTION:
Debut director Kishore Rajkumar adapts a fantasy idea and plays it to the gallery. Since the idea in itself has a good x-factor, certain scenes appeal well and helps with the laughs. As far as the writing is concerned, it follows a familiar path without taking any risks. The film is totally mainstream and might appeal well to the family audiences and kids. The kids have high chances of enjoying the sequences featuring the dog. On the downside, the film does take its own time to get into the story and the initial 25-30 minutes is a worry. The comedies featuring Ganesh and Cook with Comali Bala do not bring the intended laughter. The scenes excluding Sathish and the dog are not enjoyable. With a confined writing with more quality humour, Naai Sekar would've become a wholesome entertainer having repeat value.

CAST:
Sathish in the titular role fits the bill neatly and he seems to have picked a good film that treats him as a boy next door. Padaiyappa, the dog is a delight as it comes as a saviour whenever there's a dip. Due credits to the dog trainer for the same. Mirchi Shiva as the dog's voice is enjoyable and he definitely makes the experience a little better. Pavithra Lakshmi makes a promising debut, delivering a good performance. Veteran music director Ganesh as the villain is an interesting choice.

TECHNICAL:
Praveen Balu's cinematography is neat and apt. Anirudh and Ajesh give good support to the film with some light-hearted and likeable songs, while MS Jones Rupert's background music is enjoyable at places.

SO?
Naai Sekar is an average film that is saved to an extent by a few comedies.

Verdict Has lags and issues, but the family audiences and kids would enjoy this decent comedy entertainer!