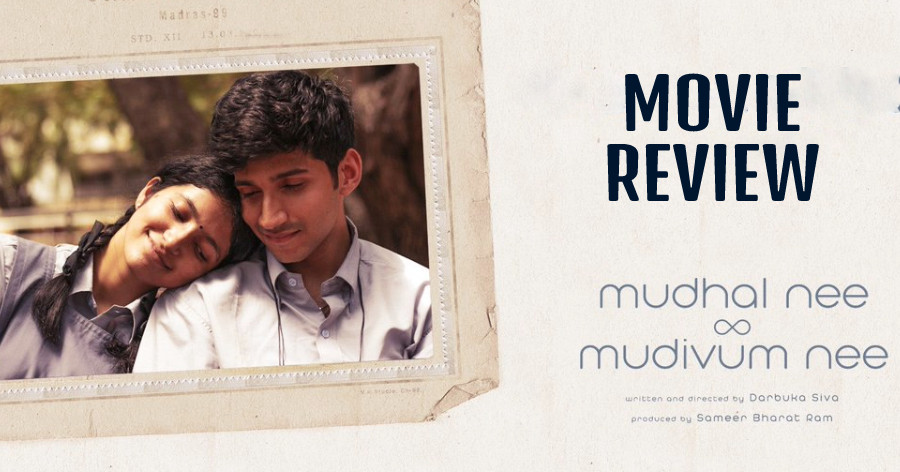 Darbuka Siva, who has weaved magic through his songs in movies like Kidaari and Enai Noki Paayum Thota, has turned a filmmaker with Mudhal Nee Mudivum Nee, which has been released on Zee 5 streaming platform today. The film features a bunch of newcomers leading the cast, with music composed by Darbuka Siva.

STORY:
Mudhal Nee Mudivum Nee is a story about a bunch of friends, who get together after several years, for a reunion to meet their school time buddies. Vinoth (Kishen Das), Rekha (Meetha Raghunath), Chinese (Harish), Anu (Amirtha), Catherine, Victoria, Francis, Richard, Su, Durai, have the best times of their lives during their schooling. However, life changes drastically post-school for each of them. What did the reunion have in store for them forms the crux of MNMN.

SCREENPLAY, DIALOGUES & DIRECTION:
First things first, Mudhal Nee Mudivum Nee is a breath of fresh air and it is not often that we see sweet and heartwarming films of this sort. The interesting aspect of MNMN is that it sticks to reality at most places (except the climax) and doesn't go astray. The moments are organically built and the staging is beautifully done. This is where Darbuka Siva, the director holds our attention. The school-time portions keep you in smiles throughout and it definitely takes you back to your good old school days. A lot of work has gone into bringing back the 90s elements and it is noteworthy. The scenes where Catherine breaks down in front of Chinese and Su and Richard apologizes to Francis are well executed.

What doesn't work in favour of the film is its writing in the reunion portions. In a film that flows neatly, the reunion portions do find it hard to keep you engaged and it would have been really nice if those portions had some well-written scenes. Quite a few scenes in the reunion didn't seem to serve any purpose, making the screenplay fall flat. As already said, the climax looks forcefully done and it would have looked better if the film had ended with its first climax with Vinoth and Chinese sitting down in front of the car, realizing what went wrong. While watching the film, a certain section of the audience might feel the traces of movies like 96 and Ullam Ketkume.

CAST:
Among the lot, it is Kishen Das and Harish who steal the show with their fantastic performances. Kishen Das is immensely promising as an actor and he is here to stay. Be it the light-hearted and romantic moments in the school portions, or the intense and emotional moments in the reunion, Kishen does his part really well. Harish, who plays Chinese, is a delight. He breathes life to that 'Best Friend' character, putting forth a confident performance. Meetha Raghunath, who plays Rekha, is fairly impressive in a well-written role, while Amritha and Purva Raghunath deliver neat performances. The rest of the actors also contribute effectively.

TECHNICAL:
Darbuka Siva's songs and background score add more strength to the mood of the film helping in elevating the emotions. The Cinematography and DI, especially in the school portions are commendable. The edit looks neat and cohesive.

SO?
MNMN does have its dull moments in the second half, but serves as a fine watch on the whole,

Verdict With appreciable performances, MNMN is a sweet and heartwarming tale of human emotions!