Sri Ganesh's 'Kuruthi Aattam', starring Atharvaa and Priya Bhavani Shankar, is a series of action set pieces with no emotional glue to bind them together 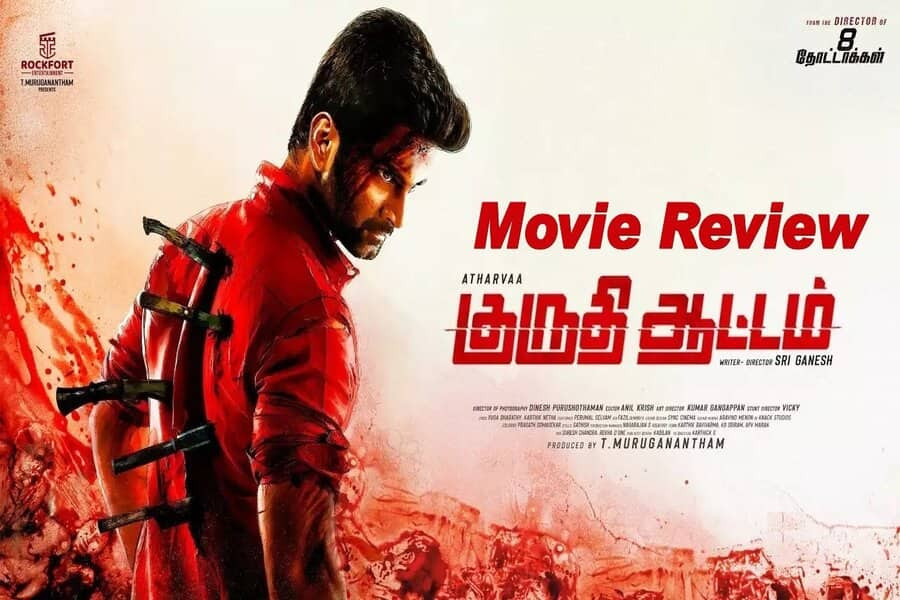 Cast : Atharvaa Murali, Priya Bhavani Shankar, Radha Ravi, Radhika, Vatsan Chakravarthi,
Production : Rock fort Entertainment
Director : Sri Ganesh
Music Director : Yuvan Shankar Raja
The narrative moves in fits and starts, and I couldn't decide if it was due the screenplay itself or due to parts being trimmed off. Either way, it's hard to root for anyone.

In an early scene in Sri Ganesh's Kuruthi Aattam, a little girl named Kanmani is seen caring for plants. One of these plants is withered and someone says it's a lost case. She says that the strong plants will survive. It's the weak ones that need our help. Later in the film, we get this question: If someone we like commits a crime, should we care about the crime or the person we care about? You think these bits of philosophy will cohere into some sort of roadmap for the film. But it's all very vague, like the fact that the hero Atharvaa is an atheist. You could leave this aspect of his personality and the story would be no different. And what about Atharvaa's statement that he does not like to lose? It's again something that appears to have been written to punch up just that moment. It adds nothing to the overall picture.

The problem, I think, is that Sri Ganesh wanted to follow up his excellent 8 Thottakkal with a full-on action feature. And because 8 Thottakkal was also appreciated for its philosophical flavour, he has tried to follow the same path. But that earlier film was slower paced, and it had the space to hold these existential thoughts – plus, the narrative itself was built on these thoughts. In the fast-paced Kuruthi Aattam, I wished he'd ditched the philosophies and just stuck to the characters and the conflicts. The setting is Madurai, which is ruled by gangsters with barely any cops in sight. Radharavi and Radhika Sarathkumar play two of the biggest gangsters. Thanks to the character played by Kanna Ravi, kabaddi player Atharvaa gets involved in this world. Is he a kabaddi player, though? Again, we see a couple of matches but the inciting incident could have come even without this sport.

The film is essentially a series of action set pieces, but there's no emotional glue to bind them together. Priya Bhavani Shankar plays the generic love interest, who is unsure about committing to a violent man – again, none of this is consistent. The friendship between Kanna Ravi and Atharvaa is written too conveniently – you know right away what's coming. Or take Atharvaa's best buddies. They move away from him when he is arrested, but there's no real reconciliation later. We get a child with a bad fever, a mute mother. The only relationship written with an iota of rootedness is the one between Atharvaa and his sister. But again, you see what's coming from a mile away and the poor sister gets no closure.

The narrative moves in fits and starts, and I couldn't decide if it was due to the screenplay itself or due to parts being trimmed off. Either way, it's hard to root for anyone – especially when they are given ultra-basic plot points like a pair of easily identified red shirts and an easily overheard phone conversation. The performances are not bad, but again, more effort could have gone into making the characters unique. For instance, Radhika needed to be more badass. Instead, she comes off like a mildly stern maternal character. Maybe the idea was to have her underplay and avoid the "Sornakka" gangster tropes. But it doesn't have the desired effect. What saves the film to an extent is the occasional staging, and some of cinematographer Dinesh Purushothaman's frames. The most emotional shot is that of a door opening and revealing a small-sized hall. It's the heroine's home. To her left is a framed photo of her mother. To her right, we see her father, who walks with a limp. In an instant (and without any dialogue) we get an insight into this woman's world. It's a picture that speaks a thousand words. Otherwise, we are left with a shell of a film that speaks with a thousand punches.

Here is the new intense and powerful promo of Atharvaa's Kuruthi Aattam - watch the video here!

Latest glimpse of Priya Bhavani Shankar from her next film is out | Take a look!