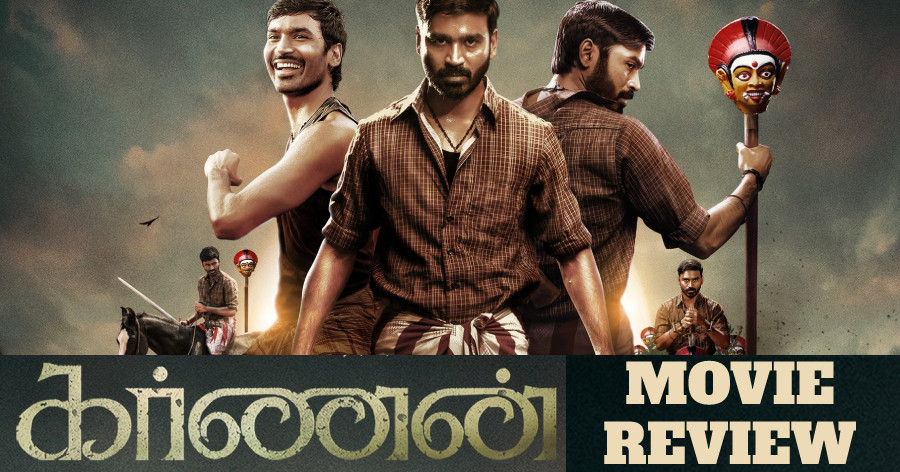 There are a few films which do something deep inside your heart when you exit from the theatre. Dhanush's latest release, Karnan is one such film. Karnan is directed by Mari Selvaraj who made a strong statement with his debut film, Pariyerum Perumal. Rajisha Vijayan, Lal, Yogi Babu, Natty, and others play supporting roles in the film.

What happens when an ambitious youth, Karnan (Dhanush) decides to fight for the basic rights and well-being of his people? He fights the caste, he fights the police, he fights the system. What was Karnan's fate and did he win the fight for his people? The film answers these questions, taking you through an intense roller coaster ride.

Dhanush has aced the role of Karnan and it is a one-of-a-kind character for the star performer. As a raging young man who represents his people, Dhanush is highly impressive. Karnan is definitely a standout film that helps Dhanush elevate himself as an actor. Dhanush's eyes are so powerful and it speaks volumes. Thanks to director Mari Selvaraj and cinematographer Theni Eswar for capturing it at the right places. When a star like Dhanush decides to be a part of a film like this, it will only give more boost and support to filmmakers like Mari Selvaraj. Dhanush's dialogue delivery and body language are brilliant.

Lal has got a meaty role in the film and he delivers one of his career-best performances. As a dotting caretaker of Karnan, Lal leaves a good impact. Rajisha Vijayan shines in her debut film and she emotes well with her eyes, with the limited scope that she gets. Natty does his part as well. Lakshmi Priya is one of the supporting actors who garner good attention with her performance and let us hope Tamil cinema gives her stronger characters. Yogi Babu is used as an actor and not a comedian and it is a welcoming changeover. The casting has been done in a neat fashion and most of them suit their part well. The usage of the villagers as actors is what gives Karnan the X-factor and the rooted performances of the villagers are a strong asset for the film.

While watching Karnan, you are in awe with the conviction and control that Mari Selvaraj has over his craft and it is outstanding. Mari makes an important and strong statement with Karnan. He touches upon various topics like oppression, caste discrimination, and the politics behind each and every aspect of life, including the name of a person. The writing has been top-notch and it touches a good high in regular intervals. Mari Selvaraj has created a new world and the characters in this world are beautifully written and sketched. The film could've faltered at any place, considering its sensitive story and the premise, but Mari, with his execution skills, makes sure that Karnan stands tall.

Mari Selvaraj is clear in his intentions and knows what he wants to tell. He makes good use of the film language and this is yet another film that says education is important more than anything. Mari also leaves his stamp with good usage of metaphors. He has used Gods as a metaphor and it gives you goosebumps at several places. If you felt energized after seeing Karuppi painted in blue colour, running towards Pariyan with so much love, get ready for such moments in Karnan, as well. The film ends on a fantastic high and it makes you feel empathetic and energized. The emotions peak at the final act and it has been packed neatly.

Unlike Pariyerum Perumal, Karnan's love angle is quite weak and doesn't make you feel connected. However, considering the larger conflict in the picture, this may not be a bigger complaint. The first half's pace might be of concern for a few people, but Mari seems to have taken up that time for establishing the characters and the village.

Santhosh Narayanan's music is top class and he is one of the strong pillars of the movie. His intense and striking background score elevates the emotions to high levels. Kandaa Vara Sollunga has been shot beautifully and it sets a good start for the movie. Theni Eswar is another hero of Karnan. Eswar's lens capture the soil and its characters in the most striking manner. Selva RK's editing is apt.

Alex, the horse, which acted in Dhanush's Karnan passes away - Mari Selvaraj gets emotional!