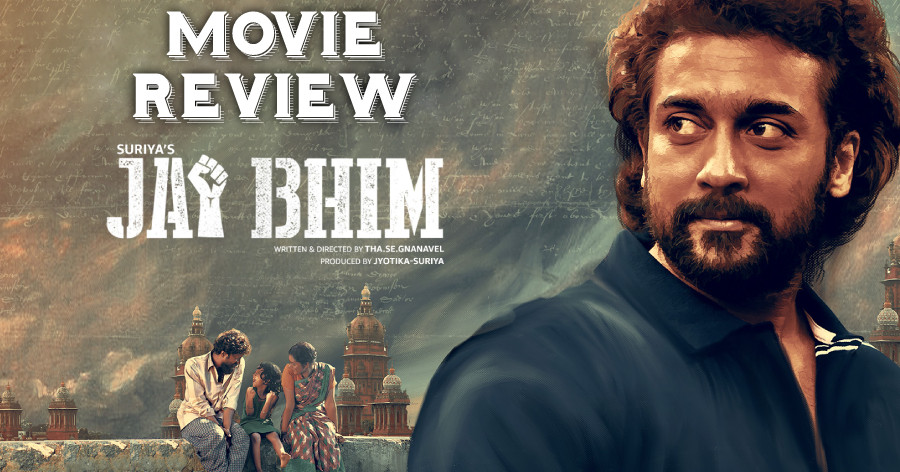 Suriya's Jai Bhim, an intense courtroom drama, directed by Tha Se Gnanavel, has released on Amazon Prime Video. The film features Manikandan, Lijomol Jose, Rajisha Vijayan, Prakash Raj, and Rao Ramesh in the star cast and has music composed by Sean Roldan. With a positive pre-release buzz, the film is now out and here is our take on the film.

STORY:
Rajakannu (Manikandan), who belongs to a hunting community, Irular tribe (SC),  is arrested by the police, and is falsely accused of a robbery. Knowing that the underprivileged wouldn't have any financial or political support to save themselves, the Police arrest the people from the downtrodden community to complete the cases. After a few days of Rajakannu's arrest, it comes to notice that he and two others from the tribe have gone missing from the custody. Sengani (Lijomol Jose), in the pursuit of saving her husband, meets lawyer Chandru (Suriya), seeking him for help. The rest of the film revolves around Chandru's fight for justice.

SCREENPLAY, DIALOGUES & DIRECTION:
Director Tha Se Gnanavel surprises us with his conviction and command over the craft as his earlier outing (Kootathil Oruthan) was quite an average fair. However, with Jai Bhim, he hits the ball out of the park. The film manages to raise the right kind of questions, bringing to light several harsh realities that existed and still exist. The film starts off on an impactful note and from thereon we are transported into the world of Jai Bhim and there is no looking back. The tension that is usually expected in a courtroom drama prevails in Jai Bhim and that keeps the audience engrossed for the major part. We might draw quite a few similarities with Visaranai and if that film had left an impact on you, there are high chances that Jai Bhim would also. The film effectively showcases caste discrimination, the plight of the oppressed, and the abuse of power. The courtroom sequences are shot in a realistic manner with the lawyer character he's portraying not over-reacting at any place.

On the downside, the writing could have been more powerful, in terms of sketching the opposition parties of Justice Chandru. There is no strong opposition for him to fight and win the case and, it would’ve been nice if the writing had been better in that part. Also, the police brutality visuals look overdone and those scenes are not for the faint-hearted. The effort to make the audience empathize with the characters look forced and it would have been nice if the sympathizing happened through the writing, instead of going with the police brutality.

CAST:
Suriya's grounded act as Chandru is impressive and this one is going to be one of the performances that will stay in the hearts of the fans for a long time. Never ever in the film, the star factor of Suriya comes into the play and it is always the story that takes the driver seat and that aspect is praiseworthy. More than being an actor, Suriya needs to be applauded for anchoring this project as a producer as it is a bold film to be made. Jai Bhim is not an easy film to produce and it shows Suriya’s noble intention to tell important stories.

Manikandan and Lijomol Jose are the real trump cards of Jai Bhim. Both the actors have lived in their respective roles - Rajakannu and Sengani. Manikandan seems to be one of the most honest and promising actors Tamil cinema has found in recent times and with every film, he gets better. Lijomol Jose is solid in a role that is well-written and she brings out her pain in an effective manner with her eyes. Manikandan and Lijomol Jose strike good chemistry in the initial scenes of the film and their performances are sure to impact the viewers. Prakash Raj, Rajisha Vijayan, Rao Ramesh, and Guru Somasundaram deliver fine performances, making the film look complete, in terms of casting.

TECHNICAL:
Sean Roldan's backgroud music uplifts the emotions neatly and the score is supportive for the majority of the scenes. The songs does not hinder the pace of the film and helps in Gnanavel's storytelling. SR Kathir's visuals capture the emotions in the best possible angles and the visuals act as an effective tool of the narrative. Philomin's cuts are apt, but it would have been better if the violence scenes were shortened.

SO?
Jai Bhim is an impactful film that effectively showcases the problems faced by the oppressed classes.

Verdict Suriya powerfully anchors this hard-hitting and engaging courtroom drama! A Must Watch!