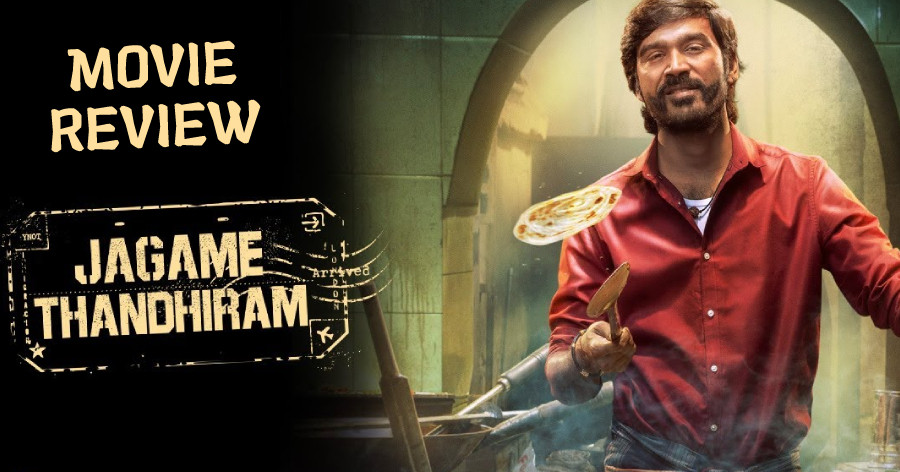 Amidst huge expectations and hype, Dhanush's Jagame Thandhiram has been released and it is streaming on Netflix platform. Directed by Karthik Subbaraj and produced by Sashikanth's Y Not Studios, the film has music composed by Santhosh Narayanan. James Cosmo, Joju George, Aishwarya Lekshmi, Kalaiyarasan, are some of the prominent names in the film's star cast.

Story - Jagame Thandhiram takes us through the journey of a gangster named Suruli, played brilliantly by Dhanush. Suruli, a local parotta master/gangster in Madurai travels to London after being called by Peter (James Cosmo) to help him in his fight against Sivadoss (Joju George). Suruli is a carefree youth who'd do anything for money. Some of his actions in London land him in big trouble. What were those actions and how did Suruli defeat all the odds? Watch the film to know!

Cast - Dhanush takes complete control of Jagame Thandhiram, right from his first shot and it is a delight to see him perform as Suruli. The energy that he brings (along with few Superstar Rajinikanth mannerisms) through the character is fantastic and this is a film that offers him good scope to emote at different levels. Dhanush has delivered an earnest performance and he has been supported by a good cast too.

James Cosmo, as Peter, looks deadly and his performance is quite impressive, as well. Joju George as Sivadoss garners good attention with his acting skills and he is a good asset for the film. However, it feels sad that he has not been utilized to his full potential. Aishwarya Lekshmi as Attilla exhibits good promise and let us hope that Jagame Thandhiram is a good start to her Tamil career. While she looks beautiful in the frames, she also delivers a neat performance. Among the other supporting actors, Sharath Ravi as Vicky is enjoyable.

Screenplay & Direction - Jagame Thandhiram is a well-intentioned film on paper and the idea to address the immigrant issue is noteworthy. The film talks about racism and the plight of immigrants, but it is not effectively conveyed. The impact is not felt anywhere. Post the high-point halfway through the film, the engagement completely falls flat. The writing is very predictable and you know what Suruli is going to do next. Karthik Subbaraj is someone who is strong in writing and we've seen him write some of the best scenes in Tamil cinema through his previous works. Unfortunately, nothing of that sort is felt in Jagame Thandhiram.

The film opens really well and the first hour of the film is fun and engaging to watch. The issues start to pop up only after that. With more substance in the writing and effective execution, Jagame Thandhiram would have appealed much better. The dialogues are on point and it goes well along with the film.

Technical Department - Jagame Thandhiram is technically, a sound film! Santhosh Narayanan's background score uplifts the movie and stands as a solid support system. The talented composer's wacky musical scores are a treat. The visuals are brilliant. Be it the colours, or the frames, or the lighting pattern, everything was in unison. Kudos to cinematographer Shreyaas Krishna. Vivek Harshan's edit could have been crispier.

So? - Except for Dhanush, Santhosh Narayanan, and Shreyaas Krishna, there isn't anything great that works in the favour of the movie.

Verdict: An underwhelming action drama that falls flat with average writing and packaging.

NEW exciting addition to Vishnu Vishal's grand sports film - Check out who it is!

LATEST: Dhanush to join hands with this star director for the third time? - Exciting Deets here!

Unexpected big change in Dhanush's Vaathi - important talent walks out of the film!