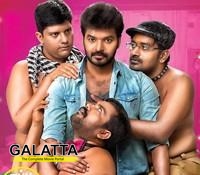 Krishna (Jai) has become suicidal after his girlfriend ditches him for another man. He then decides to take the help of a psychiatrist, who suggests to express and share his pain with his friends. Things don't work out well and Krishna decides to end his life again. Knowing of their friend's tendency, Karunakaran, Kaali Venkat, and Naveen embark on a journey to save his friend.

Directed by Mahendran Rajamani and produced by Shan Sutharsan under his banner Vansan Movies, the film turns out to be a slow-paced drama that tests the patience.

Jai has done his part well. The film has a stupendous casting lineup comprising of Karunakaran, Kaali Venkat, newcomer Naveen, Thambi Ramaiah, Motta Rajendran and others. And of course, their comedy timings have worked out well but only in parts.

The witty one-liners crack the nut and work out well. Mahendran himself has penned the dialogues, which is really impressive.

Music by Santhosh Dayanidhi is soothing and it is complimented well by Mahesh Muthusamy's visuals.

Despite having a well-verse cast list, the director fails to pull off the narrative. Though the comedy works out in bits, it could have been much better.

The screenplay and story lacked attention and detailing. In addition, the dead slow pace typically tests a viewer's patience.

The editing could have been much better, the film slows down after a point and it gets worse as the narration progresses.