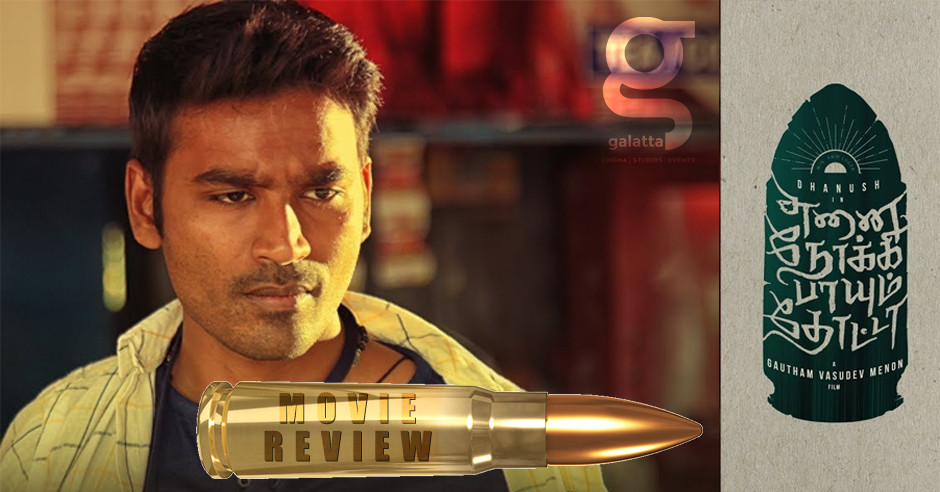 Director Gautham Vasudev Menon's long delayed Enai Noki Paayum Thota has finally hit the screens, today. Despite the long delay and several changes in the release dates, the film has managed to hold the buzz and expectations among the fans, thanks to Darbuka Siva's blockbuster songs and the brand of Dhanush and GVM. Has the long wait proven to be useful for the fans and the Tamil cinema audience? Here is what you need to know.

Raghu (Dhanush) gets attracted on seeing actress Lekha (Megha Akash) for the first time, when she comes to shoot for a film in his college. The casual interactions between Raghu and Lekha establish a bond between them and they become close, falling for each other. That is when Raghu realises Lekha is facing troubles from her producer/director Kuberan (Senthil Veeraasamy). Raghu's brother Thiru (Sasikumar) is also connected to Lekha and Kuberan. How is he connected and what does Raghu do to save Lekha forms the rest of the plot.

Dhanush delivers a solid performance that is in complete contrast from what we have seen all these days. The charm that he brings in through his screen presence is enjoyable and he is outstanding as a performer. His acting is natural and staged neatly and hence you see a very organically impressive performance. The way Dhanush has been utilized by GVM is refreshing to witness on screen and it is definitely a visual treat.

Megha Akash is a wonderful find (considering ENPT should have been her debut) and she has managed to pull off an intense role with varied emotions. She looks beautiful on screen and when it is a GVM film, do you have to ask any more? Senthil Veerasaamy as the antagonist is convincing however, it is not a strongly written character. You can't accept a producer/filmmaker to be an underground don. Sasikumar tries to fit himself into the GVM world and he speaks a lot of English dialogues. Unfortunately, he seems to be a misfit as Thiru.

Despite the delay in release, the scenes don't look odd and it is completely fresh. The visual taste that Gautham has can never get old and he gets to present the film neatly. The song visuals are a delight to watch and all the three blockbuster numbers (Maruvaarthai, Naan Pizhaipeno and Visiri) are beautifully filmed. Watch out for the breezy energy that Dhanush holds with his dance moves in 'Naan Pizhaipeno' song.

On the flipside, the voice-overs definitely get overboard in ENPT. You can almost hear a voice-over in every single scene and there is no respite from it. After a certain point in time, the voice-overs become tiresome and spoil the fun. Had the content been told through the visual medium, the experience would have been even better.

A section of the audience might find similarities to Achcham Yenbadhu Madamaiyada, in terms of the treatment. Like in AYM, this film also deals with a romantic first half and an action packed second half. There's no believability in the action sequences and the choreography is over the top. The stunts and the logic behind it are questionable. The first half is very engaging and it is packed with the GVM moments that you would expect. The refreshing romance between Dhanush and Megha is interesting to watch.

The letdown happens to be the second half, which doesn't hook you. The film falls down after the Mumbai episode starts playing. The scenes are hurried at places and the editing looks clumsier, as you aren't able to follow the proceedings. The emphasis on the supposedly core conflict is not well established. The 'arms dealing' concept isn't explained clearly as well. The entire Sasikumar mission episode could have been put together cohesively. The writing, in an overall picture, doesn't look complete or convincing. When you watch a GVM film, you would obviously expect strong writing, which goes completely missing. In that aspect, GVM as a writer, has disappointed.

Darbuka Siva's music is a precious gem for ENPT. The young talent, who had already proved his mettle with the songs, has delivered a very supportive background score that helps in the film's proceedings. He is here to stay. Jomon T John and Manoj Paramahamsa have given their best and the contrast between the first half and second half is well presented. As said earlier, the editing lacks finesse and also, the film needs a bit of trimming as the duration is long. The pace of the film in the second half is also a worry.

In a nutshell, Enai Noki Paayum Thota has its own share of positives and negatives, but fails to captivate, as a film.

New exciting UPDATE on Vishal's next cop film - here is all you need to know!!