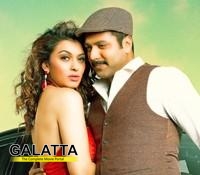 Bogan, which stars Arvind Swamy, Jayam Ravi and Hansika in the lead, has finally hit the screens today. The team has been tight-lipped about the film's plot and the one who have watched Bogan will definitely get the reason. Interestingly, the film has a supernatural element to it, wait before your conclude here is the plot.

Arvind Swamy is a royal heir but due to few unexpected situations his family loses all their assets and his parents commit suicide. After doing few run-of-the-mill kind of jobs to earn money, he gets associated with an archeological group. There he meets a saint Bogan, who knows the secret to interchange souls. Cleverly, Arvind grabs the secret document and he uses it to earn money by looting jewelry shops and banks.

On the other hand, Jayam Ravi is a cop and a doting son. Like any hero, he also meets his lady love Hansika. But trouble brews when Arvind uses Ravi's father's body to loot money from a bank. Now, the case is on his table. And the rest an action-adventure which you have to watch on the big screens.

Jayam Ravi, who has been choosing a lot of unique scripts, has impressed with his choice once again. He is perfect as a cop and he is well complimented by the rest of the characters.

Arvind Swamy once again steals the limelight just like Thani Oruvan. He is the perfect man--good looking, excellent acting skills and witty too.

Though Hansika doesn't have much of a role, she does well in her scenes. The romance between Ravi and Hansika is crafted well.

Kudos to director Lakshmanan for coming up with a unique script, the supernatural element has definitely worked out well.

Soundararajan's visuals are well complimented by Imman's music. While Anthony's cuts are sleek and crisp.

The scenes between Arvind Swamy and Jayam Ravi often reminds us of their previous film Thani Oruvan, even their getups are similar.

The second half could have been better, too many things pops up and it makes the plot confusing.

A First For Hansika In Gulaebaghavali

Bogan to be remade in Telugu?