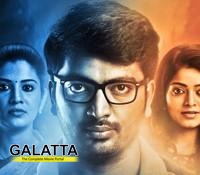 Adhe Kangal is a story that revolves around a chef and restaurateur named Varun (Kalai) who falls 'blindly' in love with Deepa (Sshivada). What follows is a romantic thriller with interesting twists and turns!

• The lead cast has given a good performance and Sshivada has made the most of the strong role given to her.

• Ghibran's background score is something that we loved!

• Bala Saravanan's role and comedy has worked out well and we laughed out loud for his scenes.

• The thriller has managed to be unpredictable and fresh.

• The film slows down at certain parts. It could have been paced better.

Adhe Kangal is a well-plotted thriller that will keep you engaged!

Verdict: Adhe Kangal is a well-plotted thriller that will keep you engaged!

A First Ever For Janani Iyer In Vidhi Madhi Ultaa

Two In A Row Now For Janani Iyer

Adhe Kangal gets a good start

Adhe Kangal gets a good start

Adhe Kangal all set for a grand release