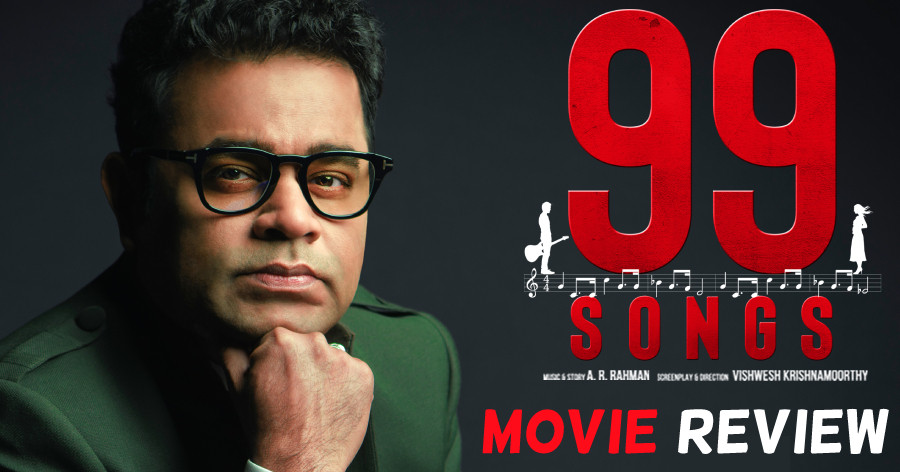 Legendary composer A.R.Rahman's debut film as a producer and story writer, 99 Songs has released today. The film, which is directed by Vishwesh Krishnamoorthy, features newcomers Ehan Bhatt and Edilsy Vargas in the lead roles. Here is what we think about the film.

99 Songs is the story of a young musician, Jay (Ehan Bhatt) who embarks on a journey to rediscover himself and the sounds around him. He is put in a situation to prove his belief which is - one song can change the world. However, during his musical journey, he goes through a lot of problems, struggles, fights, accidents, mental pressures, and more. Did he manage to defeat all the problems that came his way and succeed as a musician, forms the plot.

99 Songs is a visual spectacle, right from the word go. Cinematographers Tanay Satam and James Cowley deliver outstanding work and the visuals look poetic and splendid. The treatment of the film is stylish and Rahman's production value is grand. At the same time, it feels like the real essence of the plot or the screenplay got faded due to the ultimately stylized treatment.

The true hero of 99 Songs is undoubtedly A.R.Rahman's music. The legendary composer's music transports you into a new world and it is an experience, by itself. Be it, 'Oor Aayiram Vaanavil, 'Sofia', 'Jwalamukhi', 'Naalai Naalai', or 'Punnagai Maayai', the songs sound fresh and elevates the emotions beautifully. The story and scenes of 99 Songs are driven by the music and Rahman's work is magical.

Director Gautham Vasudev Menon has written the dialogues for the Tamil version and he does a fair job. G.V.Prakash Kumar, who has dubbed for Ehan Bhatt's character, adds more strength to the lead character with his neat modulations and control over the craft.

Ehan Bhatt, as Jay, delivers an earnest performance and he has made a promising debut indeed. Ehan manages to showcase his emotions through his eyes and his acting is one of the positives of the movie. Edilsy Vargas is decent as Sofia, but fails to leave an impact as an actor. The character is also not strongly written. Tenzin Dalha, as Jay's friend, Polo is impressive and he is well supported by VJ Abishek Raaja, who has dubbed for the character in Tamil. Manisha Koirala, Lisa Ray, Ranjit Barot, and others do their part well in the limited scope that they get.

On the downside, in a film of this kind, emotions are important and those emotions don't hit you at the right points. You could not empathize with Jay during his lows. More effective execution and packaging could have made 99 Songs appeal more. The pace of the film is quite slow and the film does not have the required high moments to engage the audience. The visuals of the songs are treated like independent music videos and it disconnects you from the film. Also, the political angle to the story looks out of place and doesn't go along well with a movie of this kind.

A.R.Rahman's 99 Songs to release on Netflix this week - Breaking announcement!

WOW: A.R.Rahman and Atlee team up once again for this project!

Check out the impressive trailer of A.R.Rahman's debut film as a writer - 99 Songs