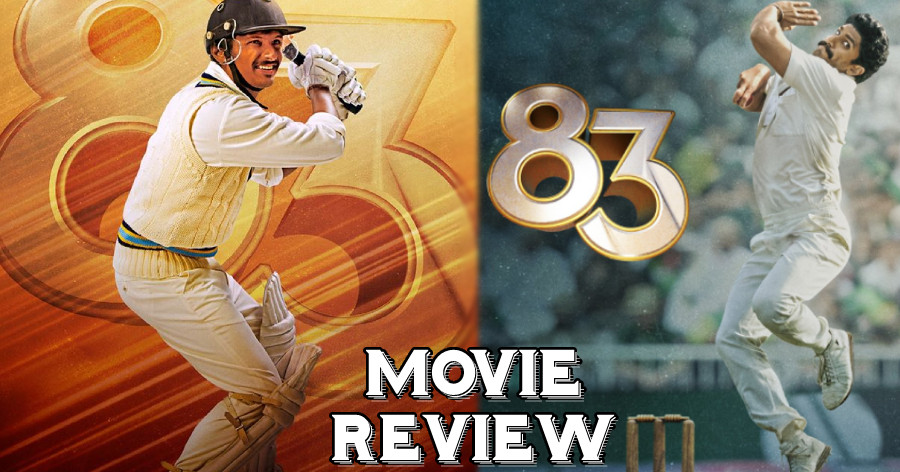 Ranveer Singh's long awaited and highly anticipated sports drama, 83 has been watched. The film, which is based on the real life incidents of the journey of the Indian Cricket Team in the 1983 World Cup, is directed by Kabir Khan. Jiiva, Deepika Padukone, Pankaj Tripathi, and several others play supporting roles in this film.

STORY:
As already known, 83 is a story about the real-life Indian Cricket Team that had to undergo a highly challenging journey to emerge as the Champions of the 1983 World Cup. When everyone wrote off the team and considered them to be the weak link, under Kapil Dev's (Ranveer Singh) leadership, the Indian Team defeated every single odds that came their way to become the World Cup Winners. The film showcases this exciting journey of the team in a gripping fashion.

SCREENPLAY, DIALOGUES & DIRECTION:
83 begins steadily and the first half moves at a good pace with enough scenes to hold your attention. The second half is highly charged with emotional and heart touching scenes that take you back to 1983 times. Despite us knowing the historical incident and what the final result is going to be, the film makes us cheer for its characters and the team and that is where 83 triumphs. 83 is a euphoria that needs to be experienced only on the big screen and director Kabir Khan packs the film with a punch. 83 is also one of those rarest films where predictability doesn't come into play since emotions weigh heavier than predictability.

The scenes make you emotional, happy, cheerful, proud, and whatnot! Director Kabir Khan's conviction with which he has shot and packaged the film needs to be applauded. His team has done their level best to recreate the magical moments of the 83 World Cup. The emotional dots are neatly connected which makes us stay close to the characters in the film. The film is exceptional in all aspects, especially the screenplay and direction that stand out. The screenplay has got a great momentum where you have a high point in regular intervals. The scene that showcases Kapil Dev's world record earns the applause instantly and the film has several more such scenes. Kabir never allows the film to face a dip, in terms of pace and engagement.

83 is nothing short of a visual treat, especially for the cricket lovers. Pointing out a negative in this film would be a tough choice in this film. 83 is also a film that respects the game of cricket with dignity and if you are a fan of the game, you cannot miss this one!

CAST:
It is not an easy task to portray a legendary personality in a film, but, Ranveer Singh has taken up that challenge and has lived the role of Kapil Dev. Ranveer goes all guns blazing with his performance that is both emotional and intense. There's a certain level of subtlety that Kapil Dev possessed and Ranveer manages to bring that on screen. Ranveer is definitely the show stealer of 83 and he has surely delivered one of his career best performances.

Jiiva is the next person after Ranveer Singh who gets more prominence and the talented actor delivers a delightful performance. As Cheeka (Krishnamachari Srikkanth), Jiiva aces the role with perfection and helps in comic reliefs at regular intervals. His enjoyable performance is sure to strike a connection with the audience. Pankaj Tripathi as PR Man Singh acts as a solid support system, delivering what is expected of him. Deepika Padukone in a short and sweet role is impressive. Tahir Raj Bhasin, Saqib Saleem, Jatin Sarma, Chirag Patil and others play their respective parts effectively. The casting has been top-notch in terms of the selection of the actors to play the cricketers and due credits to Mukesh Chhabra and the team for the same.

TECHNICAL:
Pritam's songs are quite good and passable, while Julius Packiam's background score adds to the adrenaline rush and excitement of the audience. Aseem Mishra's cinematography is splendid as he has indeed recreated the highlight moments of the 1983 World Cup with believability. Additional brownie points to the makeup department without whom the film wouldn't have looked this real. The makeover for each actor to look like the real-life cricketer is remarkable.

SO?
With incredible performances and fantastic packaging, 83 is a blockbuster winner!

Verdict 83 is a euphoria that makes you emotional, happy, ecstatic, and proud! A Glorious Win!