Vishal Tamannaah Action trailer to release for Diwali on Oct 27 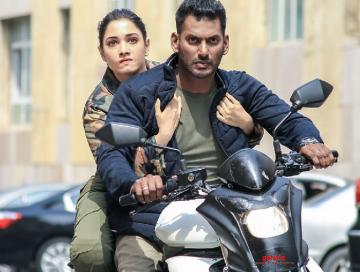 Vishal was last seen in the Venkat Mohan directed Ayogya, the Tamil remake of Jr NTR's Temper. He is gearing up for the release of his next film, Action, directed by Sundar C. Action will the mark the third time association of Vishal and Sundar C after Aambala and the unreleased Madha Gaja Raja. Action, as the title suggests, will be a stylish action drama, which has been majorly shot in abroad. Tamannaah and Malayalam talent Aishwarya Lekshmi play the female leads in this film which has music by Hiphop Tamizha.

The teaser of Action which released last month has clocked close to 8 million views on YouTube. We did see some over the top action sequences in that teaser which also had a few glamorous shots. The latest update is that the official trailer of this film is all set to release tomorrow (October 27) on the festive occasion of Deepavali. The makers made this announcement a few hours back and it has made the fans look forward to something interesting.

The trailer will be released on the official YouTube channel of Muzik 24*7 who owns the film's audio rights. Produced by Trident Arts, Action is touted to hit the screens on November 15th alongside Vijay Sethupathi's Sangathamizhan.