Popular Bollywood actress Tanushree Dutta recently met with a road accident while en route to a temple when the vehicle she was traveling in suddenly had a brake failure. She managed to escape with a few stitches in the 'freak accident', while also sharing a series of pictures, including one that showed the bruises on her leg. Posting the pictures, Tanushree, who is seen in a maroon and white ethnic wear, wrote, "Today was an adventurous day!! But finally did make it to Mahakaal darshan..Freak accident on my way to temple...brake fail crash.. . Got away with just a few stitches...Jai Shree Mahakaal!" Check out her post below:

Tanushree further provided an elaborated context to the incident on her Instagram Stories, while also sharing a few more pictures from her visit to the temple. She wrote, "My faith is not blind. It sees & feels & knows stuff. My faith is the rope I have whenever life feels like quicksand..Its a shield too in times like this.. Like in the moment of my crash..even in that dreadfull moment when I didn't know what is in future a still small voice in my heart spoke to me and said that I will be fine. I prayed for no broken bones...so no broken bones..People on the 2nd floor heard the crash..but no broken bones..I choose to live by faith...whatever happens happens for my best. It's OK.. I'm fine now..Tomorrow will be a better day." She added, "And I believe that nothing bad can ever happen on Sundays & Mondays...so if somethings happened it's robabl • ood for me in some unfathomable way...Something great is about to manifest. Maybe I'm supposed to receive something awesome & God is just removing the bad stuff first...I'm excited for tomorrow...#enthucutlet". Tanushree concluded her statement, saying, "The heavy fat layer in my leg didn't let my bones break due to impact. My diet change last few months..Fat ke bhi kuch fayde hai...cute lagne ke alawa.. (there area few advantages to fat... apart from looking cute..) Below are the screenshots of her Insta Stories: 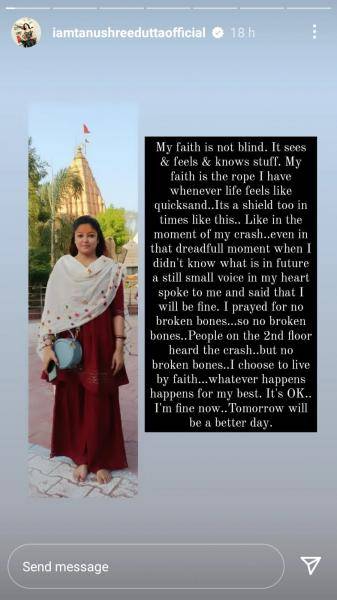 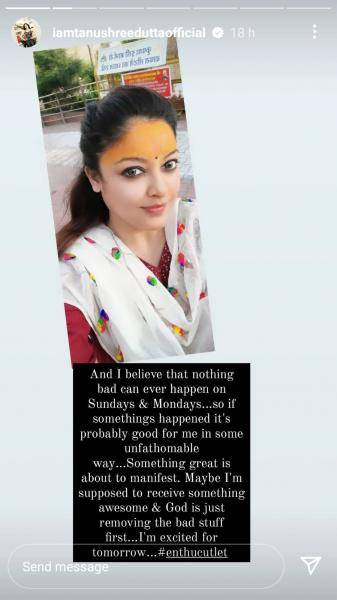 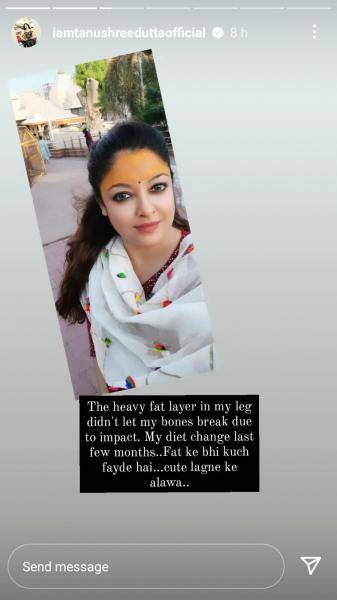 Tanushree Dutta became a nationwide sensation after her debut in 2005 in the smash hit film, Aashiq Banaya Aapne. She is best known among Tamil cinema fans for starring in Theeradha Vilaiyattu Pillai opposite Vishal, which also had Sarah-Jane Dias and Neetu Chandra as the female leads under Thiru's direction and featured music by Yuvan Shankar Raja.