We are a week away now from the grand theatrical release of The Legend, which marks 'Legend' Saravanan's acting debut, and all sights are now set on the film coming out in cinemas on July 28. Directed by the JD-Jerry duo and produced under The New Legend Saravana Stores Productions banner, the upcoming pan-Indian film will open in more than 2,500 theatres globally and the team is leaving no stone unturned in making it a massive celebration. With promotions being carried out around the world, the Central Board of Film Certification (CBFC) has now announced that The Legend has been certified with a 'U/A' certificate and will have a runtime of two hours and forty-one minutes. 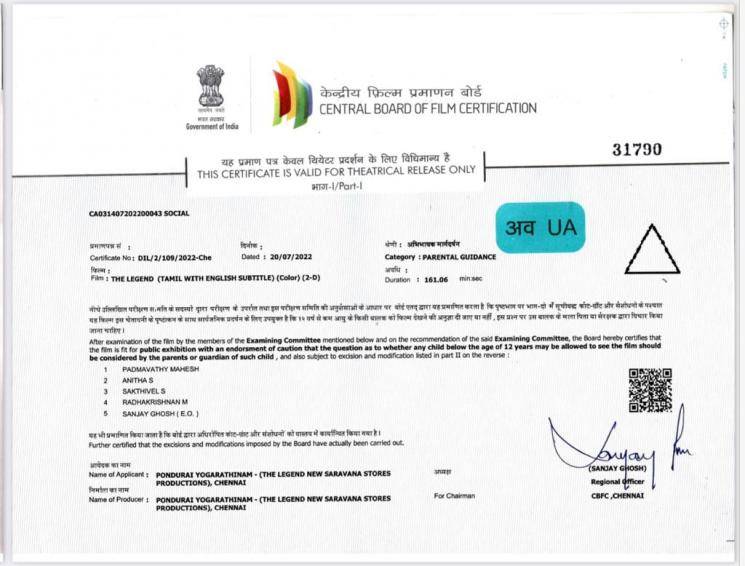 Expectations for The Legend are huge as the buzz for the film has been getting bigger by the day. The response for the promos and the songs have done wonders for the film as fans have been sharing their excitement on social media to witness 'Legend' Saravanan, the current owner of one of India's leading retail stores, Saravana Stores, in action on the big screen. The visuals for The Legend have shown that the film will be high on action and has been made as a commercial feast appealing to audiences of all ages. Likewise, the promotions for the film have been done in an orderly manner with 'Legend' Saravanan announcing his entry on social media on Twitter where he tweeted his arrival, writing, "Delighted to enter the world of social media & meet you all! Equally thrilled to present."

Legend Saravanan's The Legend gets a massive new release announcement - Top banner on board! VIDEO!

OFFICIALLY ANNOUNCED: Check out the release date of Legend Saravanan's The Legend!

Kangana Ranaut announces her next project but this time with a twist - here are the deets!