The love of fans for Thalapathy Vijay has always been unconditional and the star has proved from time to time that his love towards them is no less. Each and every fan feels Thalapathy's love for them whenever he utters the words ‘Enn Nenjil Kudiyirukkum Enn Anbu Rasigargaluku..’. The actor has always welcomed his fans with open arms whenever he gets a chance to meet them, be it during an event or even at shooting spots. Vijay has even held special fans meet sessions to talk to his fans and take photographs with them. In yet another such incident showing two fans' literally blind love for him, Thalapathy Vijay has proved why he is admired by many and has such loyal fan following.

A few hours ago, an emotional video surfaced online in which a visually-challenged couple spoke their hearts out and expressed their love for Thalapathy. They also said that they’ve been trying to meet Vijay for more than 20 years but haven't had the opportunity to meet the star in person and they wished to meet him at least once in their lifetime. The touching video soon went viral on social media and everyone who saw it hoped that the couple's dream to meet Vijay would become a reality soon.

Heartfelt wishes do come true! The video somehow reached Thalapathy Vijay himself. The actor moved by the visually-challenged couple's love, arranged a meeting with them and fulfilled their wish. Vijay's manager and co-producer of his upcoming film Master Jagadish took to Twitter and said, "The dream has come true!"

Vijay's lovable gesture towards the couple has won hearts on social media and is the talk of the town. Thalapathy Vijay For A Reason! 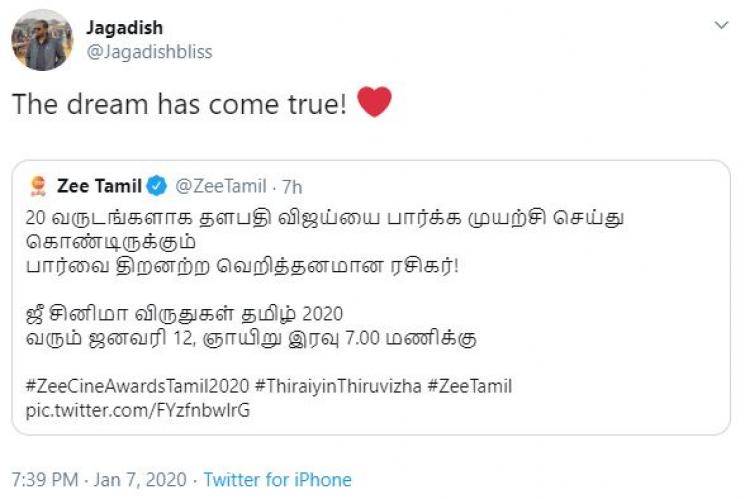