The title of Thalapathy 66 was recently revealed to be Varisu and the first look posters turned viral among the fans on social media. Varisu will be Thalapathy Vijay's next film in Tamil cinema after Beast and the fans have pinned high hopes on the project. After starring in a series of action dramas, Vijay will be seen in a family drama through Varisu and it is going to be interesting to see what the makers have in store for the audience. Varisu is directed by Vamshi Paidipally who has earlier made movies like Thozha and Maharshi (Mahesh Babu).

Produced by Dil Raju under the banner of Sri Venkateswara Creations on a grand scale, the film has music composed by Thaman S who is scoring music for a Vijay starrer for the first time. Last night (June 25), Thaman took to his official Instagram page to share an interesting update on the film and it has caught the attention of the fans and film buffs. The music composition works for the film are currently happening in full swing and Thaman shared the update about the same through a story. Thaman shared a picture of him, along with director Vamshi and lyricist Vivek and wrote, "#T66 compositions. #Varisu @directorvamshi @lyricist_vivek".

The picture has been doing good rounds on social media since last night and it looks like an exciting treat awaits fans. Thaman is in great form in the recent past and he will be looking forward to delivering the best for Thalapathy Vijay and his fans. Varisu features Rashmika Mandanna as the female lead and has an ensemble supporting star cast that includes the likes of Prabhu, Prakash Raj, Sarath Kumar, Yogi Babu, Sangitha Krish, Shaam, Samyuktha and others. This emotional family drama is slated to release in theatres for Pongal 2023 and it will be released in Tamil and Telugu. 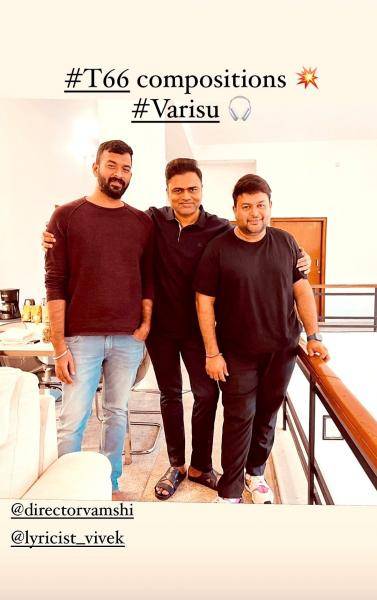 Madhavan opens up about directing one more film after Rocketry: The Nambi Effect - Here's what he had to say!

Deepika Padukone to appear in a cameo in Shah Rukh Khan and Atlee's Jawan - Latest BUZZ!

RJ Balaji opens up about narrating a story to 'Thalapathy' Vijay - Here's what happened during their meeting!

WOW: Gautham Menon's son makes his debut in cricket and he picks up a wicket in his first ball!

Man asks Malavika Mohanan to post her bikini picture - know what she replied? Check Out!