Meanwhile, the film's lead actress, Teju Ashwini took to her official Instagram page to share an update on the film and it has made the fans excited. Teju has completed dubbing for her portions in the film and she shared the update on her Instagram page. Sharing a selfie picture with director Hariharan, Teju wrote, "Done with ESP Dubbing. Can't wait for the release. @HariharanA Thank you Haari".

Earlier in the week, Ashwin Kumar had completed his dubbing and now Teju has completed her work as well. It looks like the film is right on track for release. Enna Solla Pogirai has music composed by Vivek - Mervin who have delivered two chartbuster singles - 'Aasai' and 'Cute Ponnu'. The rest of the songs and the trailer would be released in the coming days. Produced by R Ravindran under the banner of Trident Arts, Enna Solla Pogirai has cinematography handled by Richard M Nathan.

Ashwin earned a humongous fan base after participating in the second season of Cook with Comali and there has been no look back since then. The young talent would be looking forward to a positive start in Tamil cinema. For now, check out the latest update on Enna Solla Pogirai shared by actress Teju Ashwini here: 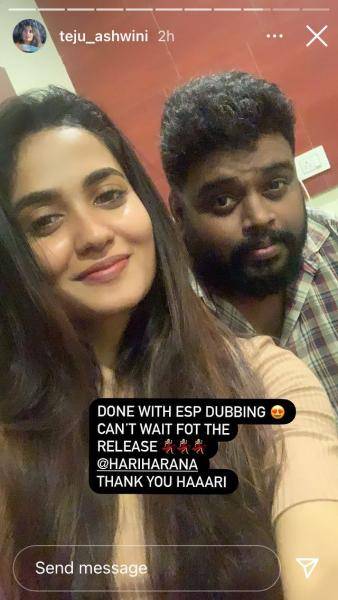