Director Suseenthiran is yet to get a breakthrough in his recent past as his last five films have got mixed and negative reviews from the critics. However, the director has shown promise with his next outing, Champion, which features newcomer Vishwa and dubsmash fame Mirnalini Ravi in the lead roles. Actors Manoj Bharathiraja, Narain, and Jayaprakash form the supporting cast in this football based sports action drama. The team has now released the video of the song 'Veerane Vaa', which is composed by the young and talented Arrol Corelli. 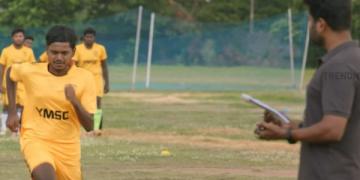 This motivational video song tracks down the football journey of Vishwa and captures the moments from his practice games. There is also a glimpse of the protagonist's romantic side. This song has been crooned by Nivas and Arrol Corelli with lyrics by Kabilan. The song has got a favourable reception from the audience on YouTube and the visuals also look good.

The film's trailer which released a few days back was quite promising and if the film happens to be as good as the trailer, we can expect the film to do good business at the box office. This new video song has been released on the official YouTube channel of Trend Music who owns the film's audio rights. For now, check out the 'Veerane Vaa' video song from Champion here: