Suriya's latest film Jai Bhim produced under his 2D Entertainment banner along with Jyotika and directed by Tha. Se. Gnanavel premiered earlier this month on Amazon Prime Video and has been basking in the glory of positive reviews from fans and personalities from all walks of life. The courtroom drama, which revolved around a real life legal battle in 1993 that was led by Rtd. Justice Chandru, who fought for the justice of an Irular tribe woman and the people from the oppressed castes who were framed for crimes they did not commit, had run into trouble with the Tamil Nadu political party Pattali Makkal Katchi (PMK).

The PMK had cited that Suriya's Jai Bhim had hurt the sentiments of the Vanniyar community after there was a depiction of their emblem in a particular shot in the film, while also naming the character of the killer cop as Gurumurthy. Last week, the PMK leader and MP Dr. Anbumani Ramadoss wrote a letter to Suriya asking nine questions, with the actor also issuing a response. However, things took an ugly turn on Monday when PMK local politician Sidhamalli Pazhaniswamy made an announcement that a reward of rupees one lakh will be given to anyone for physically attacking Suriya. Vanniyar Sangam leader Arul Mozhi too issued a legal notice to Suriya, Jyotika and Jai Bhim director Tha. Se. Gnanavel and demanded a compensation of Rs 5 crores for hurting the sentiments of the people in his community.

With the controversy over Jai Bhim boiling over, fans took to social media and expressed a wave of support to Suriya with the hashtag #WeStandWithSuriya. Several notable film celebrities too have given their support for Suriya as well. In that light, the South Indian Film Chamber of Commerce (SIFCC) has now issued a statement addressed to MP Anbumani Ramadoss regarding the removal of the particular shot in Jai Bhim, while also expressing their support for Suriya. The SIFCC's letter is as follows:

You had requested for the removal of your community's emblem, which was included by the film's technical artists in Suriya's Jai Bhim released on an OTT platform. Mr. Suriya, who is a member of the South Indian Film Chamber of Commerce, respects your sentiments and has agreed for the removal of the particular frame from the film immediately. It is cause of great distress to the SIFCC that your party continues to criticize Mr Suriya when the inclusion of the emblem in the film has nothing to do with the actor or the production banner. We request you to withhold from criticizing Mr Suriya, who has been spearheading the cause of education for the downtrodden students irrespective of politics, caste, religious or ethnic affiliation." 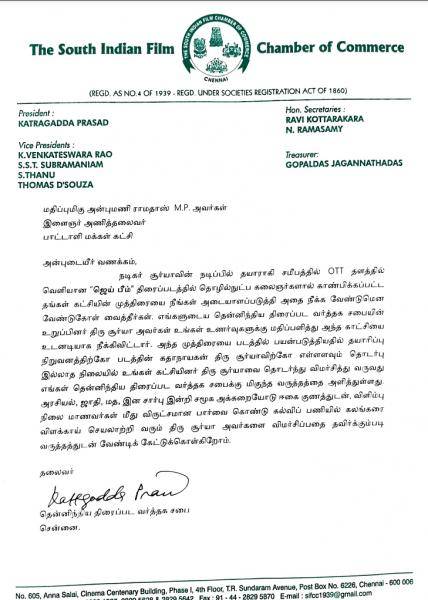