Suriya's Etharkkum Thunindhavan has completed its censor formalities and is just one step away from its grand theatrical release. The film has been censored with a U/A certificate by the Central Board of Film Certification (CBFC) and the final runtime, as per the CBFC certificate, is 150.38 minutes (2 hours 30 minutes). The details regarding the censor were updated on the official website of CBFC. This development has excited the fans who are now looking forward to witnessing the film in the theatres. As per the initial plan, Etharkkum Thunindhavan is scheduled to release on February 4, 2022, in theatres, and according to the buzz in the trade, the makers are expected to take a final call about the same in the next few days.

The third wave of Covid 19 is at its peak now with cases increasing every day and several notable biggies including the likes of RRR, Valimai, and Radhe Shyam have pushed their release to a later date. The lockdown restrictions that have been in effect for the last few days in Tamil Nadu should reflect the reduction of cases in the coming days. Depending on the intensity of the spread and night curfew/Sunday lockdown, a firm decision on ET's release is expected to be taken. As of now, the film is said to be on track for release on February 4.

Produced by Sun Pictures on a grand scale, the film has music composed by D Imman whose songs haven't managed to strike big with the masses. The recently released 'Summa Surrunu' has comparatively got a better reach among the audiences. Etharkkum Thunindhavan is directed by blockbuster filmmaker Pandiraj who would be looking forward to continuing the success streak of Kadai Kutty Singam and Namma Veettu Pillai with ET as well. The film has Doctor fame Priyanka Arul Mohan as the female lead and Vinay as the key antagonist. Find below the official censor details of Suriya's Etharkkum Thunindhavan: 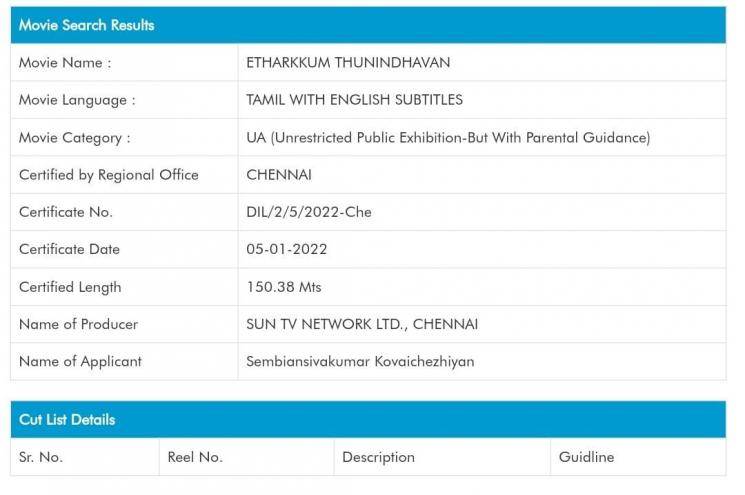 "21 days of my life....": Jyothika's emotional statement with Suriya from their vacation diaries - VIDEO!