Silambarasan TR is fresh off the blockbuster success of his Maanaadu and is currently busy with the work on his upcoming film, Vendhu Thanindhathu Kaadu, being directed by Gautham Vasudev Menon. Simbu, whose Maanaadu was directed by Venkat Prabhu under Suresh Kamatchi's V House Productions banner and featuring music by Yuvan Shankar Raja, recently had its success meet, in which the cast and crew members celebrated the triumph of the film both critically and commercially. Among the names that were missing at the Maanaadu success meet was STR, who had been busy with the shooting of his new film, and had informed that he would meet fans on January 6, while adding that they proved to be the biggest backbone for its victory.

Meanwhile, Simbu on Sunday released a statement telling fans that the scheduled meeting has been postponed due to the spread of the Omicron variant in Tamil Nadu. The flamboyant actor said, "In view of the safe health of fans, the proposed Maanaadu success meet on January 6 has been rescheduled as a result of the escalating rise in cases due to the Omicron variant." T. Vasu, All-India STR Fans Welfare Association secretary, in the press note further stated, "A new date for the Maanaadu success meet will be announced officially at a later date." Below is STR's press release: 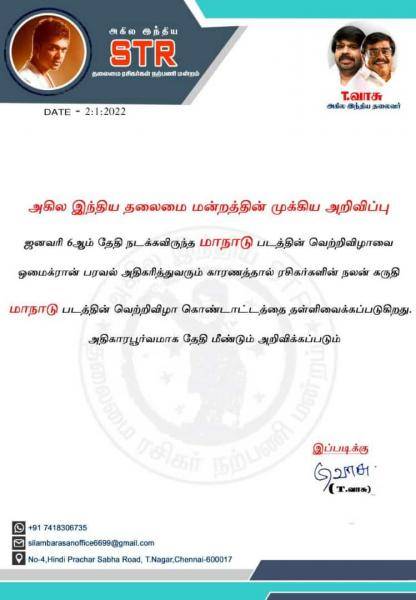 Maanaadu's blockbuster success came as a big sigh of relief and hope towards the end of the year for both Tamil cinema and Silambarasan's fans, who will now be looking forward to his next projects starting with the ongoing Vendhu Thanindhathu Kaadu, which marks his reunion with Gautham Menon and Academy Award-winning composer A. R. Rahman, for the third time after Vinnaithaandi Varuvaayaa and Achcham Yenbadhu Madamaiyada. STR also has in his lineup the gangster venture Pathu Thala, followed by Corona Kumar, including the long-delayed Maha in which he will be seen in an extended cameo.

Vishal-SJ Suryah's pan-Indian film gets an intriguing title - Check out the mass reveal!