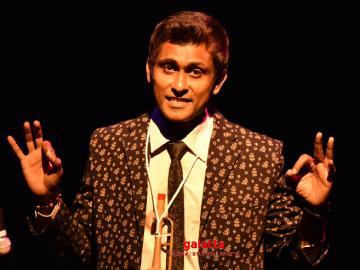 Alexander Babu, known more as Alex, is one of the top stand-up comedians currently. He is an engineer turned stand-up artiste, who has a number of hit shows to his credit. His latest show Alex in Wonderland, premiered on Amazon Prime and catapulted his fame to a different level altogether. His mimicry, singing and musical talent, coupled with his comic timing and witty wordplay, make him a unique combination on stage. We have now received an update from the man himself, that he is a part of a top hero's next project, through his latest Instagram post!

Alex's recent post shows him alongside the handsome hunk R. Madhavan and director Dhilip. Though the post just states that he is a part of a project with these two, nothing else has been made clear in it. However, it is already known that Madhavan is working on the Tamil remake of the superhit 2015 Malayalam movie Charlie, which had Dulquer Salmaan and Parvathy Thiruvothu in the lead. This movie, went on floors last year and stars Shraddha Srinath as the female lead. Ghibran is reportedly scoring the music for this movie, which has been titled Maara!

Dhilip, who is directing Maara, has earlier helmed the Netflix original Kalki, which stars Kishore and Yasmin Ponnappa in the lead. This movie came in for a lot of critical acclaim. Madhavan has undergone an amazing transformation for this role in Maara. He also has a number of other movies in the pipeline, including the multi-lingual Rocketry: The Nambi Effect, which also marks his directorial debut and the other multi-lingual Nishabdam, alongside Anushka Shetty. Alexander has revealed that he is a part of this project but it is not sure, in what capacity. Whether Alex would be playing a role or if he is part of the technical team, is yet to be known. Stay tuned for updates...

Spent a few days again in rainy Kochi this week hanging out with the one and only @actormaddy and @dhilipgads and the gang. Learning so much thru this big special project. Waiting for the formal announcement!