Sonakshi Sinha addresses reports of being issued a non-bailable warrant - Check out her full statement!

Leading Bollywood actress Sonakshi Sinha, best known among Tamil cinema fans for starring in the 'Superstar' Rajinikanth-starrer Lingaa in 2014, has denied claims of a non-bailable warrant being issued against her.  There were media reports over the weekend stating Sonakshi had been issued a non-bailable warrant for defrauding an individual of a large sum of money. Labeling the reports as "fake news", the star took to her Instagram Stories and released a statement calling out the complainant for misusing her name in an effort to cause disrepute for the sole purpose of gaining publicity.

In a detailed note, Sonakshi wrote, "There have been rumours of a non-bailable warrant issued against me floating in the media, without any verification from any authorities since a few days now. This is pure fiction and the work of a rogue individual trying to harass me. I request all media houses, journalists, and news reporters not to carry this fake news as it is playing into this individual’s agenda to gain publicity using my name." She continued, "This man is purely trying to gain some publicity and extort money from me by attacking my reputation which I have very proudly built over the years, by planting these malicious articles in the media. Kindly do not participate in this harassment charade. This matter is subjudice before the Muradabad court and has been stayed by the Allahabad High Court. My legal team will be taking all the necessary action against him for contempt of court. This will be my only comment on this matter until the Muradabad Court has passed its verdict, so please do not approach me for the same. I am home and I can assure you there are no warrants issued against me." Sonakshi also shared a photo of herself enjoying a hot cup of tea, and added the hashtag "house arrest" poking fun at the rumors. Check out her Insta Stories below: 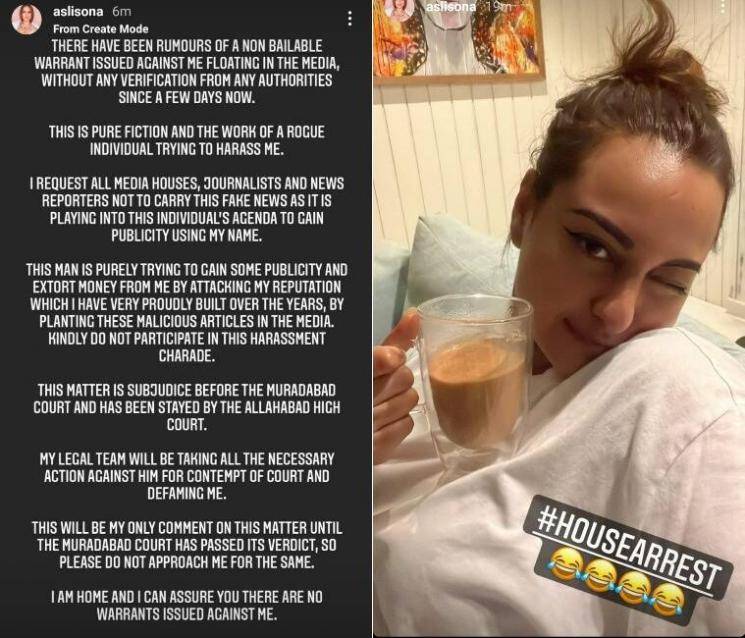 On the work front, Sonakshi Sinha was last seen in the Ajay Devgn-starrer Bhuj: The Pride of India and is currently attached to projects like Kakuda and Double XL.

GV Prakash - Gautham Vasudev Menon's Selfie - a new romantic song is out and you shouldn't miss this!