The trailer of Sivakarthikeyan’s Hero was released yesterday (December 13) and it received a positive response from the fans and the audience. The dialogues and the film’s premise earned the appreciation from the viewers and the trailer has suggested that the Hero will not be a yet another super hero film for name sake. The film is gearing up to hit the screens on December 20 in wide number of screens. This action thriller has now completed the censor test and an official announcement about it has been made by the team.

Hero has cleared the censor process with a clean ‘U’ certificate. In addition, the film will not have any statutory warning/disclaimer cards about smoking and drinking since there are no shots involving cigarettes, drugs, or alcohol. The film’s censor certificate has been released online and we see that the film will run for a duration of 164 minutes (2 hours 44 minutes). The runtime does look bit lengthy, but that wouldn’t matter at any day if the content and the screenplay is completely engaging.

Co-starring Kalyani Priyadarshan, Abhay Deol, Action King Arjun, Ivana, Robo Shankar, and others, Hero has music by Yuvan Shankar Raja, cinematography by George C Williams and editing by Ruben. With a U certificate and a runtime of 164 minutes, Hero will release in style on December 20. Get set! 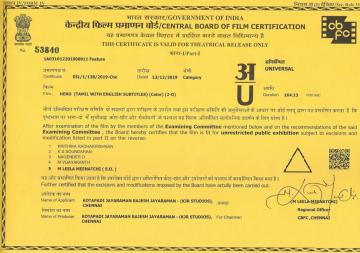 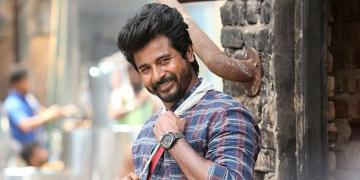