Silambarasan TR's Maanaadu is finally set to release on November 25 and we are just two days away from witnessing this political drama on the big screens. The film has got huge expectations among the fans and film buffs and the advance bookings for the film looks solid. Maanaadu is a time loop based political thriller, directed by Venkat Prabhu and has music composed by Yuvan Shankar Raja. Produced by Suresh Kamatchi, the film features Kalyani Priyadarshan as the female lead. STR will be seen playing the character of Abdul Khaaliq and the film is expected to showcase the star actor in a completely different dimension.

SJ Suryah plays the antagonist in the film and the face-off between Simbu and SJ Suryah is going to be one of the epic highlights of the film. SA Chandrasekhar, Bharathiraja, Y Gee Mahendran, Karunakaran, Premgi Amaran, Manoj Bharathiraja play supporting roles in this film which has cinematography by Richard M Nathan and editing by Praveen KL. As Maanaadu is all set to release on Thursday, the censor certification details of the film are now out on social media. As already known, the film has cleared the censors with a U/A certificate. The final runtime of the film is locked at 148 minutes (2 hours 28 minutes).

It looks like Venkat Prabhu has made a film that has a measured runtime and it is going to be interesting to see how the film engages the audience in the theatres. The picture of the censor certificate has been doing rounds on social media since this evening, grabbing the attention of the fans. Maanaadu is expected to be high on action and drama and let us hope that the film strikes a chord with the audience. Maanaadu will be Silambarasan TR's second release of this year after Eeswaran. For now, check out the trending censor certificate picture of Silambarasan TR's Maanaadu here: 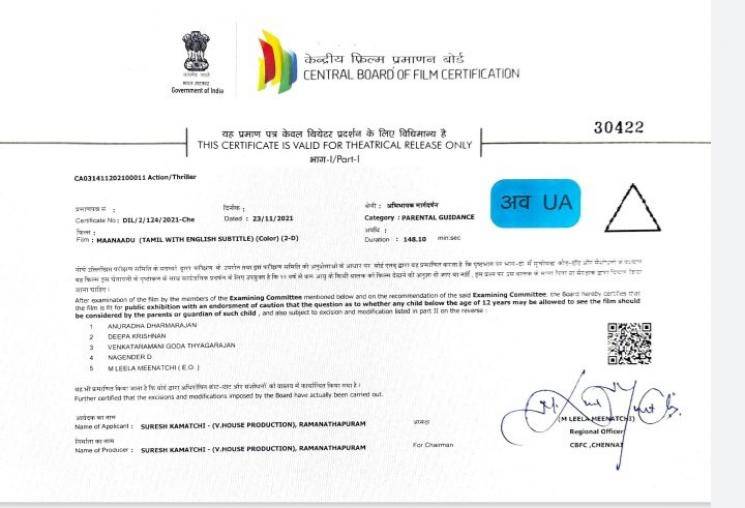 SAD: American actor Art LaFleurdies at 78 after battle with Parkinson's - condolences pour in!

Big announcement on Hiphop Tamizha's latest film - here is what you need to know!