Directed by Shaji Kailas, Prithviraj Sukumaran's period action thriller Kaduva has landed itself into a controversy. In one of the sequences in the film, the protagonist Prithviraj's character Kaduvakunnel Kuriyachan, aka Kaduva, literally meaning Tiger, says that specially-abled children are born because of the sins committed by their parents.

This controversial dialogue has been heavily criticized and condemned. Kailas took to his Facebook account and penned a lengthy apology in Tamil. The apology reads, "I express my unconditional apology over dialogues in my movie which have caused pain to the parents of children with disabilities. I request you to consider it as a mistake on our part and forgive us. The fact is that screenwriter Jinu who wrote the scene, or I who directed the sequence, or Prithviraj who acted in the scene did not think about the other aspects of the dialogue when we were shooting it. We were only thinking about conveying the extent of the villain's cruelty to the audience", he continues in his apology.

The filmmaker concludes by saying, "We did not intend to say that differently-abled children are suffering for the doings of their parents. I have seen some writings from parents, saying that they were pained by these dialogues in Kaduva. Although my apology might not undo the hurt that was caused, I am still extending an apology". 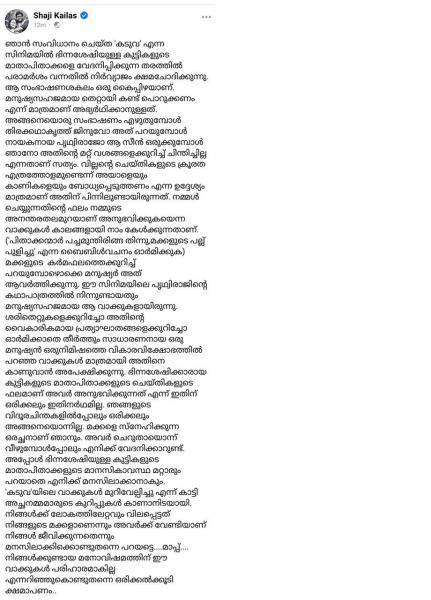 Prithviraj himself shared Shaji's apology on his official Twitter handle on Sunday (July 10). Along with that he also wrote, "Sorry. It was a mistake. We acknowledge and accept it. 🙏". Check it out:

Sorry. It was a mistake. We acknowledge and accept it. 🙏 pic.twitter.com/fl5zweAUIe

For the unversed, the original Malayalam version of the film co-starring Vivek Oberoi was released theatrically on 7 July 2022, while its dubbed version in Tamil, Telugu, Kannada, and Hindi hit the theatres later on July 8.

Is Top Gun 3 on cards? - Tom Cruise in talks for the role! Exciting Deets here!

Is Top Gun 3 on cards? - Tom Cruise in talks for the role! Exciting Deets here!