Samantha shuts down trolls with a powerful statement over bold looks - HERE'S THE FULL STORY!

Leading South Indian actress Samantha Ruth Prabhu penned a powerful note on her Instagram Stories on Saturday referring to women being judged for the clothes they wear, their race, and their appearance. She informed people to cultivate better ideals for themselves rather than arriving at conclusions about women based on their hemlines and necklines. Adding pictures of herself in a green outfit photographed during a recent red carpet appearance in her Insta Story, Samantha wrote, "As a woman, I bear firsthand knowledge of what it means to be judged. We judge women based on what they wear, their race, education, social standing, appearance, skin tone, and the list goes on and on. Making snap judgements about a person simply based on the clothes they wear is quite literally the easiest thing one can do."

Samantha further stated, "Now that we're in the year 2022- can we finally stop judging a woman based on the hemlines and necklines she adorns and focus instead on bettering ourselves? Turning that judgement inward and training it on ones own self is evolution! Projecting our ideals on someone else never did anyone any good ...let's gently rewrite the way we measure and understand a person (red heart emojis)". The blockbuster films actress, who has featured alongside top stars in South Indian cinema, recently posted pictures of herself in a green-colored dress with a plunging neckline, which she complemented with black heels and a braided hairdo. It is unknown whether her statement was a direct response to the comments on her recent photos. 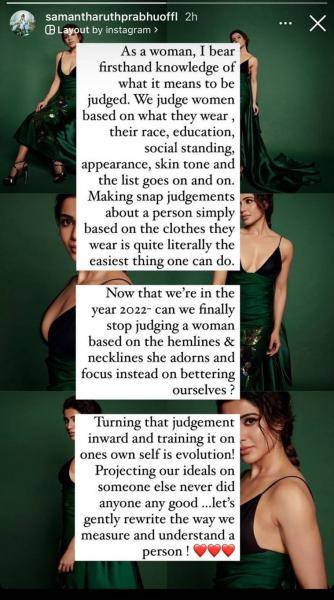 On the work front, Samantha is currently attached to several high-profile ventures starting with Kaathuvaakula Rendu Kaadhal in Tamil alongside Vijay Sethupathi and Nayanthara, with the film announced to open in theatres on April 28. She is also a part of the Telugu mythological film Shaakuntalam, which is in its post-production stages, including the pan-Indian science fiction thriller venture Yashoda. And, the icing on the cake is that Samantha is set to make her Hollywood debut in The Arrangements Of Love, which will be directed by Downtown Abbey filmmaker Philip John.

Samantha praises this actress for her riveting performance- FIND OUT WHO!!

Samantha celebrates a major milestone in the film industry - Check out her heartfelt statement!

12 Tamil movies with an out-of-the-box concept that you should NOT MISS!

VJ Anjana breaks silence on the negative comments for her photos - Here's her official statement!