Who is the music director of Vijay's Thalapathy 66? - First big hint is here!

An announcement that set South India talking, Vijay's Thalapathy 66 was officially greenlit in September, with the film's director revealed to be Vamshi Paidipally. Being produced by Telugu producers Dil Raju and Shirish’s Sri Venkateswara Creations, the upcoming film will mark Vijay's first pan-Indian venture and is touted to be an emotional drama, according to director Vamshi Paidipally, who is best known for his films like Brindavanam, Oopiri (Thozha) and Maharshi. With updates on Thalapathy 66 expected to come out in December as per Vamshi, there has been much debate on who will be composing the music for the film. In that light, chart-buster composer S. Thaman, who has often expressed his desire to work on a Vijay film, was recently queried by a fan on social media if he was going to board Thalapathy 66. Responding to the question, Thaman remained hopeful and dropped a big hint saying that he is keeping his fingers crossed. Check out the tweet below: 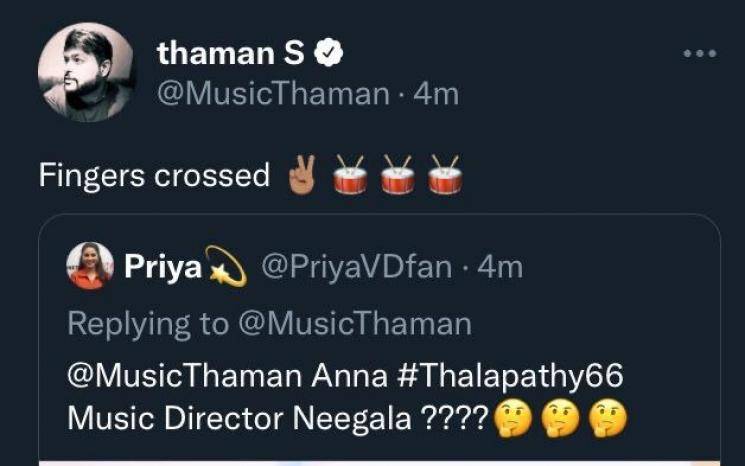 Thaman has been on a roll over the past couple of years in the Telugu film industry, especially after the blockbuster success of the Allu Arjun and Pooja Hegde-starrer Ala Vaikunthapurramuloo. The film's album continues to top the charts and was a sensational success across South India, including Tamil Nadu, where the songs received a stellar response from the youth. He is currently composing music for several Telugu biggies like Nandamuri Balakrishna's Akhanda, Mahesh Babu's action comedy Sarkaru Vaari Paata and the in-development SSMB 28 under Trivikram Srinivas's direction, the Ayyappanum Koshiyum remake Bheemla Nayak starring Pawan Kalyan and Rana Daggubati, Chiranjeevi's Lucifer remake Godfather and Ram Charan's RC 15 being directed by Shankar. Thaman is no new name to Tamil cinema fans as he has composed music most notably in films like Moscowin Kavery, Eeram, Kanchana trilogy, Osthe, Vaalu, Sketch, Eeswaran and more recently Enemy.

As of now, there has been no official announcement regarding the music director of Thalapathy 66 nd it remains to be seen whether Thaman will be joining hands with Vijay for the first time. The hit composer has worked with Vamshi Paidipally previously in Brindavanam and it will not be new ground for each of them to collaborate once again. For now, it is a waiting game and perhaps the first of the expected Thalapathy 66 nnouncements in December could likely also be one about the film's music composer.

Here is the interesting trailer of Madhavan's Decoupled - Check Out | Netflix release on Dec 17!