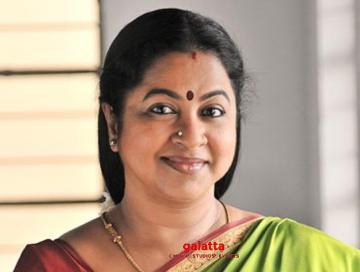 One of the most celebrated actresses in Tamil cinema, Radhika Sarathkumar has been one many aspiring actors have looked up to with over 5 decades of acting experience in films across five languages. Apart from films, she strengthened her presence in every household across Tamil Nadu after starring as the lead in the Tamil soap opera, Chithi, which ran with stellar TRP ratings between 1999-2001. That said, Radhika has now taken to her Twitter page to drop a bombshell announcement saying she will be seen in a new TV show titled Chithi 2, which will begin its telecast in January 2020. She futher added that Chithi 2 is being launched on the same date Chithi was launched 22 years ago (December 20, 1999) and will be directed by Sundar K. Vijayan, which will revolve around completely new characters. Check out her massive announcement below:

Radhika has since then gone on to appear in several serials since then and was last seen in Chandrakumari, on Sun TV, from 2018–2019 and is at present serving as the host on the Tamil Game show, Kodeeswari, on the Colors TV channel. Having made her acting debut in director Bharathiraja's Kizhakke Pogum Rail in 1978, Radhika has carved a niche for herself as a performer by giving numerous memorable performances and has in her kitty upcoming films like Gautham Menon's Dhruva Natchathiram starring 'Chiyaan' Vikram, the Mani Ratnam-produced multi-starrer, Vaanam Kottatum, Vasantabalan's Jail with G. V. Prakash and 8 Thottakkal fame Sir Ganesh's second directorial, Kuruthi Aattam, with Atharvaa and Priya Bhavani Shankar in the lead roles.