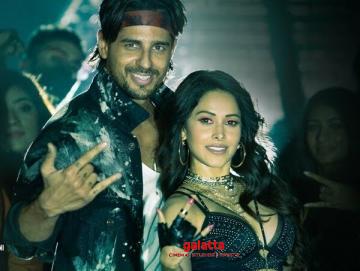 Marjaavaan, the Hindi romantic action film hit the theatres a few weeks back, opened to average reviews and did a decent job at the box-office. The film directed by Milap Zaveri features Sidharth Malhotra and Tara Sutaria as the lady lead with the popular actress Rakul Preet Sing playing an important role. Marjaavaan had Riteish Deshmukh as the antagonist as names like Nassar, Shaad Randhawa, Ravi Kishan, Varinder Singh Ghuman and Bikramjeet Kanwarpal were seen playing supporting characters. The movie is produced by Bhushan Kumar, Divya Khosla Kumar, Krishan Kumar (T-Series) and Monisha Advani, Madhu Bhojwani and Nikkhil Advani of Emmay Entertainment.

With the movie running at the theatres, the team has now released a special number from the film Marjaavaan. The song named Peeyu Datt Ke is crooned by Yo Yo Honey Singh and this peppy number features Sidharth Malhotra and Nushrat Bharucha. The dance moves are choreographed by Mudassar Khan.