Breaking update: This leading actor is no more a part of Mani Ratnam's Ponniyin Selvan 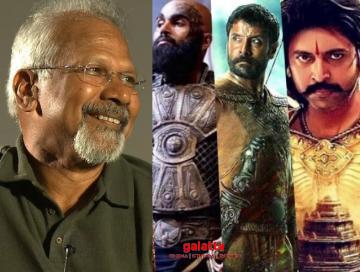 Ace director Mani Ratnam is gearing up to start the shooting of his dream project, Ponniyin Selvan, which is to be produced by Lyca, in association with Madras Talkies. This mega budget historical epic will feature an ensemble star cast including Chiyaan Vikram, Jayam Ravi, Karthi, Trisha, Aishwarya Rai Bachchan, Amitabh Bachchan, Jayaram, Lal, and others. Among this star studded unit, it has now been learnt that actor Radhakrishnan Parthiban will no longer be a part of the film.

Yes. Owing to date issues, the Oththa Seruppu filmmaker couldn't continue his journey in the film. While talking exclusively to Galatta, Parthiban said, "Yes, the news is true. I am not a part of Ponniyin Selvan due to date issues." We have to wait for few more days to know who will replace Parthiban in the film. With music by A.R.Rahman and cinematography by Ravi Varman, the shooting of this film is all set to begin from December 12 at Thailand.

The film will be shot and released as two parts and the fans are totally excited to catch this epic film on the big screen soon. The film's screenplay has been penned by Mani Ratnam, Siva Ananth, Elango Kumaravel, and Jeya Mohan.