Mirchi Shiva is gearing up for the release of his next film, Sumo which is scheduled to hit the screens for the festive occasion of Pongal, next year. This comedy entertainer is directed by S.P.Hosimin and produced by Vels Film International. The makers have now made a new announcement and this is an interesting update indeed. The official trailer of the film will release on December 10 on YouTube and this announcement was made by Vels Film International, a few hours back. This release has been planned on the special occasion of Mirchi Shiva's birthday, which also happens to be on the same day, December 10. 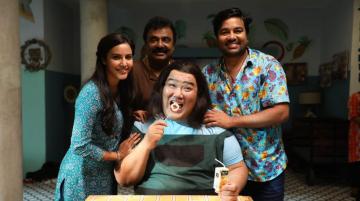 So, the trailer release will be a special gift from the team of Sumo for Shiva. It can be noted that the makers had recently screened the trailer at the Vels Film International Vetri Vizha which happened last week. The film features Priya Anand as the female lead and Yoshinori Tashiro, a real life Japanese Sumo sport player in a very important role.

With cinematography by ace photographer, Rajiv Menon, Sumo has Mirchi Shiva penning the screenplay and dialogues. The trailer had received a very good response from the people who caught a glimpse of it at the Vels Film International Vetri Vizha. Sumo has music by Nivas K Prasanna and the audio rights has been acquired by Sony Music. Get set to witness the fun-filled trailer of Sumo from December 10.