The much-awaited BIG Announcement on Ponniyin Selvan TEASER - the official word is here!

We would be delighted to have your support when we bring out the first visuals of our film. 'Ponniyin Selvan' Part - 1 is slated for a worldwide release on September 30, 2022 in Tamil, Hindi, Kannada, Telugu, and Malayalam. The magnum opus directed by Mr. Mani Ratnam is based on Kalki's eponymous Tamil novel that was serialised in the 1950s and has remained a sensational success ever since. An adventure ride set in the 10th century, 'Ponniyin Selvan' tracks the factional power struggles within the Chola empire, with the enemies of the state acting as catalysts.

The story is set in the tumultous period before Arul Mozhi Varman, later known as Raja Raja Chozhan became one of the greatest emperors in Indian history ushering in a Golden Age". Ponniyin Selvan is a film that has been long awaited and we will finally be getting to see the first visuals of the film tomorrow. Produced by Lyca Productions in association with Madras Talkies, the film has music composed by A.R.Rahman and cinematography handled by Ravi Varman. Chiyaan Vikram, Karthi, Jayam Ravi, Trisha, and Aishwarya Rai Bachchan play the lead roles in this historical epic that is set for a grand theatrical release on September 30. 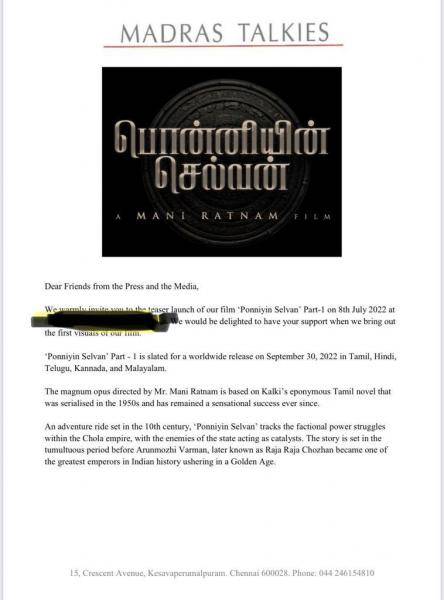 Here is an exciting BTS Video from Mani Ratnam's Ponniyin Selvan - try not to miss this!

Jayam Ravi pens a thank you note to fans on completing 19 years in the film industry - Here's his heartfelt statement!