A film that is creating a huge buzz among fans ever since it was announced in 2019 is The Legend, which will mark the big-screen acting debut of 'Legend' Saravanan, the current owner of one of the leading retail stores in India, Saravana Stores. Touted to be a sci-fi action venture, the upcoming film has been directed by JD and Jerry, the duo who are best known for the 'Thala' Ajith and 'Chiyaan' Vikram-starrer Ullasam and the 2003 horror film Whistle. With promotions already being carried out in an extensive manner, the highly-anticipated The Legend audio and trailer launch will be held at the Jawaharlal Nehru Indoor Stadium in Chennai on May 29.

Apart from The Legend being the grand launchpad for Legend Saravanan, the pan-Indian film's audio launch and trailer release event have another big highlight in the form of 10 leading heroines in Indian cinema gracing the evening. In that light, it has been announced that Pooja Hegde, Tamannaah Bhatia, Hansika Motwani, Nupur Sanon, Shraddha Srinath, Sri Leela, Dimple Hayati, Raai Lakshmi, including the film's heroine Urvashi Rautela will be in attendance at the event. There is tremendous buzz surrounding The Legend audio launch and trailer release event, especially after the feedback for the two songs - 'Mosalo Mosalu' and 'Vaadivaasal' - have been exceptional. It is to be noted that the 'Mosalo Mosalu' track was released by blockbuster filmmakers Mani Ratnam, Rajamouli, and Sukumar. 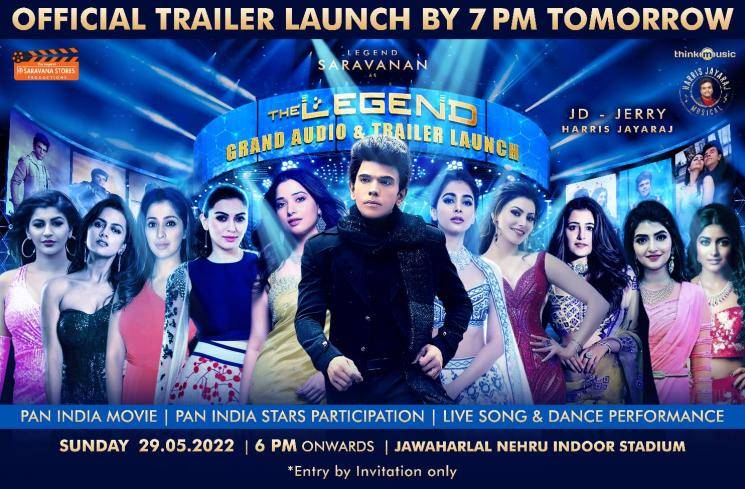 Produced under The Legend New Saravana Stores Production banner, The Legend will be released in 5 languages ​​across India as a commercial mass film that combines emotion, action, romance, and comedy and has been shot in Chennai, Kumbakonam, Pollachi, and the Himalayas, while a huge set was also erected in Chennai and some other important sequences and songs were shot in Ukraine. The Legend has music composed by Harris Jayaraj, while 'Kaviperarasu' Vairamuthu, Kabilan, Pa. Vijay, and Karki have penned the lyrics. The script will show a loving common man, with all his effort, efficiency, and strength overcoming all hurdles, and thus becoming a 'legend'.

This is how STR works! Secrets spilled!

Here is an exciting announcement on Keerthy Suresh's next biggie after Saani Kaayidham!