The Nadukkattupatti village near Manapparai in Trichy district has been in the spotlight over the past four days, as this was the site of an unfortunate incident. The two-year-old boy Sujith Wilson had stumbled and fell into an open unused deep borewell and the authorities had been trying unsuccessfully to rescue him. Various efforts were tried and even a bigger well was dug alongside the actual well to try and rescue the little boy. However, despite struggling for over 80 hours, the rescuers could only recover the decomposed body of the little boy, who was declared dead in the wee hours of today morning.

Sujith Wilson, the son of Britto Arockiyaraj and Kalarani from Nadukkattupatti, had been stuck in the unused deep borewell for over 3 days and this could have been avoided had the borewell been kept closed. Almost all social media platforms have been flooded with news articles and posts about Sujith and when news of his demise broke, many Kollywood actors, celebrities, sportspersons and politicians expressed their condolences to the bereaved family and also their outrage at this unfortunate incident, through their social media pages.

We have compiled some of these posts in this article. Scroll further to see: 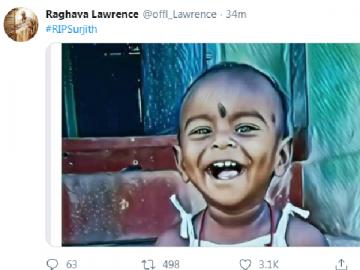