Massive update on Kaithi from producer SR Prabhu! Deets inside...

Karthi's Kaithi, which released on October 25th for the occasion of Deepavali, is going from strength to strength! This movie, directed by Lokesh Kanagaraj and bankrolled by SR Prabhu & SR Prakashbabu's Dream Warrior Pictures in association with Tiruppur Vivek's Vivekananda Pictures, is still going super strong at the theatres! The movie was released in 250 screens as it was released alongside Thalapathy Vijay's Bigil, which is directed by Atlee. However, with each passing day, more and more screens are being added for Kaithi and now, in the third week since release, the movie has a massive number of screens, as updated by SR Prabhu!

Through a post on his Facebook wall, producer SR Prabhu has announced that Kaithi is currently running in 350 screens, in the third week after release! This is a massive achievement as now Kaithi has overtaken Bigil in the number of screens it is playing in, currently! Also, the fact that no big movies have released in the past two weeks has been a major factor in contributing these many screens for Kaithi. Even in overseas markets, Kaithi has been performing amazingly well and has been getting a lot of acclaim. The number of footfalls have also been increasing in recent days.

Kaithi is a movie with no heroine or songs but has still reached very well among the audiences based purely on the story, screenplay and powerful performances from the stars. Narain, KPY Dheena, Harish Uthaman, Maryan George and Arjun Das play crucial roles in this movie, which has music by Sam CS, cinematography by Sathyan Sooryan and editing by Philominraj! With no big movie releasing this week too, we can expect another solid week at the Box Office for Kaithi. 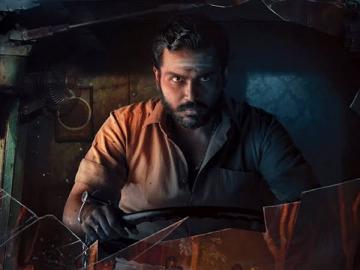 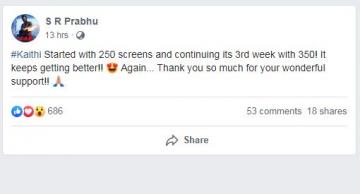 Kamal Haasan reveals interesting secrets between Rajinikanth and him!

Thalapathy 64 cast gets bigger - check out the new actors who have joined!