'Ulaganayagan' Kamal Haasan's Vikram being directed by Lokesh Kanagaraj is in its final leg of filming and has cast veteran actor-filmmaker Santhana Bharathi in a pivotal role. A shooting spot photo featuring the iconic veteran alongside Kamal Haasan and Lokesh Kanagaraj is doing the rounds online on Friday and has taken social media by storm, with fans extending their wishes to witness them in action on the big screen. Check out the latest Vikram shooting spot photo below: 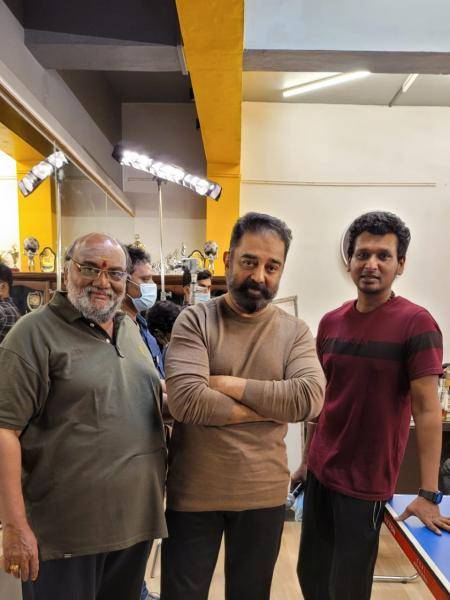 Santhana Bharathi, who has appeared in Kamal Haasan’s films like Michael Madhana Kamarajan, Nammavar, Vasool Raja MBBS, Mumbai Xpress, Dasavathaaram, and Unnaipol Oruvan to name a notable few, will no doubt be a big highlight in Vikram as their chemistry on the big screen has always been received with a double thumbs-up. Santhana Bharathi and Kamal Haasan, who incidentally are childhood friends from their school days, have also collaborated on a few other ventures as well. It is to be noted that Santhana Bharathi had directed films under Kamal's Raj Kamal Films International (RKFI) banner and they include Kadamai Kanniyam Kattupaadu, Guna, and Mahanadhi.

Could This Star Be Shiva's Lover In Kalakalappu 2?