Tamil actor-politician Kamal Haasan was admitted to a private hospital in Chennai after he complained of fever on Wednesday night, November 23, news agency ANI reported. The actor has been undergoing treatment at the Sri Ramachandra Medical Centre and will be discharged in a day or two from the hospital, as per an official health bulletin on Thursday, November 24. Kamal Haasan's hospitalization came hours after his meeting with the legendary Telugu filmmaker-actor K Viswanath on Wednesday at his residence in Hyderabad. Check out below the SRMC health bulletin: 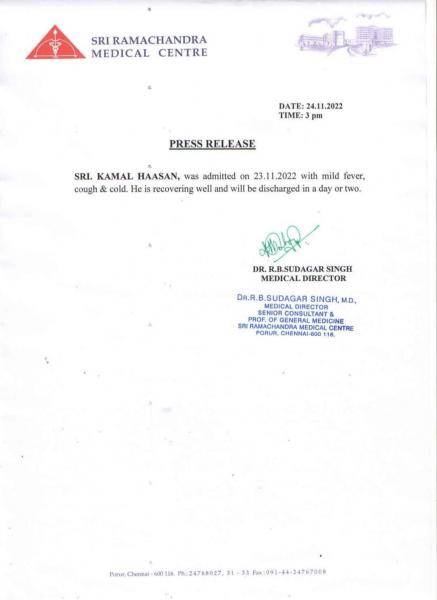 On the work front, Kamal Haasan, who was last seen earlier this year in the box office money-spinner Vikram alongside Vijay Sethupathi, Fahad Faasil, and Suriya under Lokesh Kanagaraj's direction, is currently working on the highly-anticipated Indian 2 helmed by Shankar and is being produced by Lyca Productions and Udhayanidhi Stalin's Red Giant Movies banners. The upcoming sequel to the 1996 box office blockbuster Indian will see Kamal Haasan reprising his role as Senapathy alongside Kajal Aggarwal, Priya Bhavani Shankar, Rakul Preet Singh, Siddharth, Bobby Simha, and veteran actors Delhi Ganesh and Yograj Singh (Yuvraj Singh's father), and will feature music by Anirudh Ravichander.

Kamal Haasan recently also announced his reunion with director Mani Ratnam once again after Nayakan for the tentatively titled KH 234, which will be jointly produced by Raaj Kamal Films International (RKFI), Red Giant Movies, and Madras Talkies banners and will include music by Academy Award-winning composer A. R. Rahman. There has also been a lot of talk about the iconic actor teaming up with director H. Vinoth next, whose upcoming Thunivu starring Ajith Kumar is set to open in cinemas for Pongal in January 2023. Furthermore, there had been reports earlier this year that Kamal Haasan was in discussions with Malayalam filmmaker Mahesh Narayanan of Malik fame and Tamil director Vetri Maaran for different projects.

Here are 20 Tamil movies that can be re-released in theatres - houseful shows guaranteed!

'Thalapathy' Vijay's Varisu producers get a show cause notice from Animal Welfare Board - here's the reason!

Avatar: The Way of Water's grand release - all box-office records to be re-written! Here's how!

Has Samantha been hospitalized due to Myositis complications? - Official clarification on the star actress' health condition!