A film that has been creating a lot of buzz ever since it was announced in early 2020, hit director Vignesh Shivan's next titled Kaathuvaakula Rendu Kaadhal, which has 'Makkal Selvan' Vijay Sethupathi, Nayanthara and Samantha in the lead roles has now roped in acclaimed veteran Tamil actor Prabhu. Sharing an update that post-production works have commenced, the Naanum Rowdydhaan and Thaanaa Serndha Koottam director took to social media on Thursday and shared a photo from the dubbing booth where Prabhu is seen mighty elated to be a part of the upcoming rom-com project. Vignesh Shivan posted an Instagram Story and wrote, "Always fun to be working the sweetest Parbu sir Btw, #KRKdubbing started. Early mornings & efforts always a feel". Prabhu, who has been a Tamil film industry veteran, has been seen in character roles over the years and it will be fun to witness him in a fun venture like Kaathuvaakula Rendu Kaadhal, whose inclusion in the film had been kept under wraps till now. Below is the Insta Story: 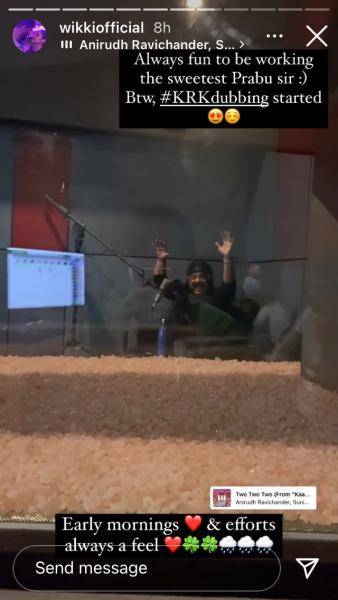 Announced to hit screens as a December release, there were various reports doing the rounds some time back that Kaathuvaakula Rendu Kaadhal might be headed for a direct OTT premiere. However, Vignesh Shivan's announcement left fans mighty happy, who are excited to watch the film when it arrives in cinemas next month. Expectations for Kaathuvaakula Rendu Kaadhal are massive as it will see the three leading stars - Vijay Sethupathi, Nayanthara and Samantha - sharing screen space alongside each other, with many strongly believing the team are packaging a thorough entertainer that will cater to both the youth and family audiences.

Earlier this month, after a long wait, the Vijay Sethupathi, Nayanthara and Samantha first look posters were released for Kaathuvaakula Rendu Kaadhal, which received a phenomenal response from fans, who are now waiting for the first visuals from the film. Vijay Sethupathi will be seen playing a character named Rambo, followed by Samantha as Khatija and Nayanthara is Kanmani. Producer Lalit Kumar, who is producing Kaathuvaakula Rendu Kaadhal under his 7 Screen Studio banner in association with Vignesh Shivan's Rowdy Pictures, also has 'Rockstar' Anirudh Ravichander composing the music and the background score, with the 'Rendu Kaadhal' and 'Two Two Two' songs turning out to be chartbusters.