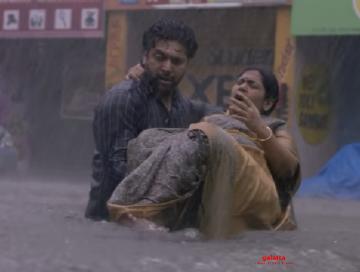 Jayam Ravi's Comali has attained a blockbuster status at the box office, thanks to the overwhelming reception from the Kollywood audience. The film recently completed its 50 days of run at the box office and marking that special occasion, the makers have released a new making video from the film. In this video, we see how the team of Comali recreated the entire Chennai floods sequence. This flood sequence happens in the climax of the film and it emphasizes on the importance of humanity. The makers had shot this scene on a grand scale at AR Rahman's studio situated in the outskirts of Chennai.

Umesh J Kumar is the man behind recreating the Chennai floods through his art work with ample support from other departments as well. We see a very big team sweating their shirts out to shoot this scene. The hard work is evident and the success of the film should have been a fulfilling pay-off for them. The audience and viewers who have seen this making video on YouTube are raving about the team's perfection and the splendid work in all the departments.

With music by Hiphop Tamizha and cinematography by Richard M Nathan, Comali was directed by debutant Pradeep Ranganathan and produced by Vels Film International. If you haven't seen this making video yet, here it is: