'Tis the season of weddings and we have so far witnessed several high-profile celebrity weddings over the past couple of months, with the latest stars to join the list include popular South Indian actor Harish Uthaman and Malayalam actress Chinnu Kuruvila. The couple exchanged wedding vows in an intimate ceremony in the presence of family members and close friends on Thursday at the Mavelikkara registrar's office in Alappuzha, Kerala under the Special Marriage Act. A photo of Harish and Chinnu outside the registrar's office has taken social media by storm, with celebrities and fans sending in their wishes to the duo, who are seen in simple traditional attire. Check out the pic below: 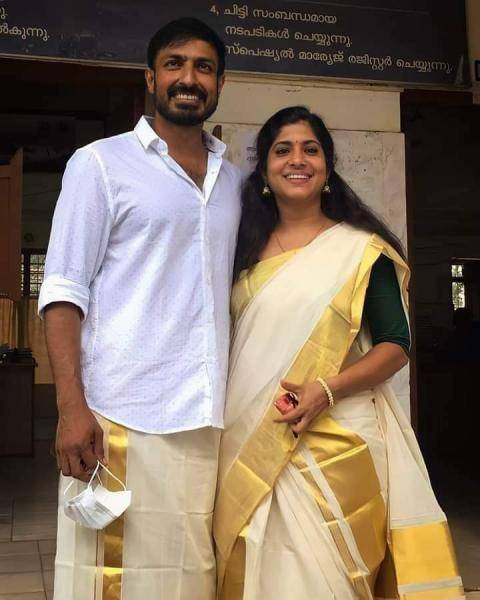 According to reports, Harish Uthaman and Chinnu Kuruvila have tied the knot after a courtship for sometime. The couple have been secretive about their relationship, with the news of their wedding coming as a big surprise to many in the industry and fans. Harish was previously married to Amrita Kalyanpur, a Mumbai-based makeup artist, in a low-key ceremony in Kerala, with the two later parting ways within a year after their wedding.

On the work front, Harish Uthaman has featured prominently in Tamil films over the years like Vishal's Pandiya Naadu, director Mysskin's Pisasu, Jayam Ravi's Thani Oruvan, Dhanush's Thodari, Vijay Sethupathi's Rekka, 'Thalapathy' Vijay's Bairavaa, Nayanthara's Dora, Karthi's Kaithi and Silambarasan TR's Eeswaran. He also played a crucial role in Tovino Thomas' Mayanadhi in Malayalam and was seen in the role of a tough cop. Harish's last major role was in the recently-released Allu Arjun and Rashmika Mandanna-starrer Pushpa and will next be seen in Sathyaraj's Theerpugal Virkapadum and Malayalam superstar Mammootty's gangster film Bheeshma Parvam. As for Chinnu Kuruvila, she is best known for her appearances in films like Kasaba, Lukka Chuppi and North 24 Katham to name a notable few.