Exciting update on RRR to be revealed tomorrow!

One of the most anticipated movies from Tollywood is RRR, which is director SS Rajamouli's upcoming project, following the massive success of the Baahubali franchise. The movie went on floors early this year and was progressing rapidly but injuries to the lead stars and some other unforeseen issues caused delays in production. RRR, starring Jr NTR and Ram Charan in the lead, is said to be based on the freedom fighters Komaram Bheem and Alluri Sitarama Raju. After a lot of speculation, it came to light that Bollywood diva Alia Bhatt would be making her Tollywood debut, as Ram Charan's pair in this movie. Now, the makers of RRR have given Tollywood fans some news to be happy about!

In a tweet from RRR's makers, it has been announced that the pair for Jr NTR in this movie would be announced tomorrow. Not only that, the movie's antagonists would also be announced at the same time. Not much has been known about RRR's cast, except that Samuthirakani and Rahul Ramakrishna are playing pivotal roles and that Ajay Devgn would be seen in an extended cameo. SS Rajamouli's regular composer MM Keeravani will be scoring the music for this movie, which will have cinematography by KK Senthil Kumar and editing by Sreekar Prasad.

RRR is reportedly being made on a massive budget of Rs. 350-400 Crores and is being bankrolled by DVV Danayya's DVV Entertainments. The story is said to be a fictional take on the lives of the two freedom fighters who fought against the British. The makers have also revealed that over 70% of the movie's shoot has been completed. Speculations suggest that the movie would be hitting the screens on 30th July, 2020! Stay tuned for all the updates... 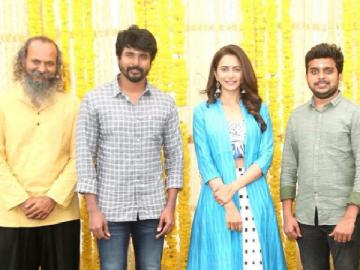 It's been a phenomenal year since the shoot of #RRR began! It was a productive year with 70% of shoot completed.✊🏻

Also putting an end to speculations, we're glad to announce the lead actress for @tarak9999 & antagonists of the film tomorrow. Stay tuned... #RRR 🔥🌊

WATCH: New Video Song From Action Is Out!