Dhanush's Next Big Project Announcement Is Here! Read on...

One of the most versatile and multi-talented stars of recent times - Dhanush is a force to reckon with. He tasted phenomenal success with his Asuran, which released recently and vaulted Dhanush into the Rs. 100 crore club. Also, his long pending Enai Noki Paayum Thota, with director Gautham Vasudev Menon, finally saw the light of day and released recently. However, the movie did not do as expected at the Box Office. Being the bush bee that he is, Dhanush is meanwhile working on his next projects and we now have an exciting announcement on one of his future projects!

The renowned production house Sun Pictures has released a new announcement that they will be bankrolling the upcoming project Dhanush 44 or D44. Dhanush is currently working on D40, which is being directed by Karthik Subbaraj, who tasted amazing success with his last project Petra, having Superstar Rajinikanth in the lead. Dhanush also has Pattas with director ES Durai Senthilkumar in the pipeline. This movie is in the post production stage and is aiming for a release in the early part of 2020!

Meanwhile, Sun Pictures are currently financing Thalaivar 168, which will have Superstar Rajinikanth in the lead and is being directed by Siruthai Siva. This movie, touted to be a rural family entertainer, has an ensemble cast including Keerthy Suresh, Khushbu, Meena, Soori and Sathish, among others. D Inman has been roped in to compose the music for Thalaivar 168. Sun Pictures have earlier distributed a number of Dhanush movies like Aadukalam, Padikkathavan and Mappillai. Further details regarding #D44 are awaited. Check out the post from Sun Pictures here. 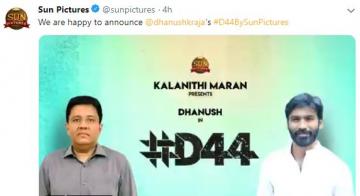