Video: Thrilling new trailer from Pancharaaksharam is here! Check it out... 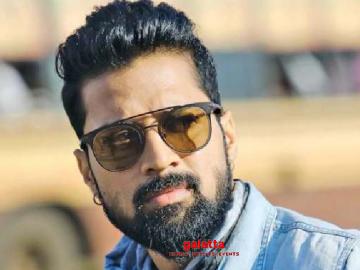 The uniquely titled Pancharaaksharam is an upcoming multi-genre movie which is said to have an engrossing and gripping tale. Starring Santhish Prathap, Madhu Shalini, Sana Althaf, Gokul Anand and Ashwin Jerome in the lead, this movie is written and directed by Balaji Vairamuthu. Vairamuthu is bankrolling this project under his Paradox Productions banner with Yuva taking care of the cinematography and Anand Geraldin handling the editing. KS Sundaramurthy has scored the music for this movie and three songs and the jukebox have already been released. Said to be a psychological, supernatural, adventure thriller, Pancharaaksharam's second trailer has now been released.

This trailer, which runs for about 2 minutes, starts of on a jolly note but soon sets the scene for spine chilling thrill. A group of five people seem to embark on a journey which is fraught with danger, adventure and some supernatural elements. Santhosh Prathap, who was last seen in Karthi's Dev, has some memorable work to his credit but is still awaiting his big break and this movie could very well be it. He also has a number of other movies in hand, including Comrade, Meendum Vaa Arugil Vaa, Oh My Kadavule, Irumbu Manithan, Yen Peyar Anandhan and a couple of other projects!

Madhu Shalini has proven herself to be a wonderful performer and was last seen in Tamil movies alongside Kamal Haasan in the 2015 movie Thoongaa Vanam. She has since been working in Telugu movies and her last release there was the 2018 movie Goodachari. Pancharaaksharam also has Sana Althaf of Chennai 600029 II fame. Her other long pending movie RK Nagar, with Vaibhav as the lead, was released recently on Netflix. Pancharaaksharam is said to have some exciting stunts and is based on the five leads who incorporate the qualities of the five basic elements.