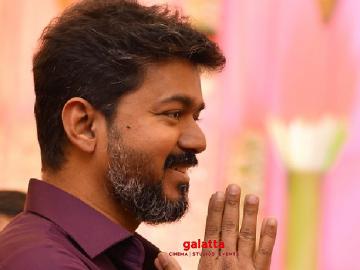 Thalapathy Vijay is on a roll and his latest release Bigil made record collections at the Box Office, not just in India but across the world! He has since moved on to his next project - Thalapathy 64, with director Lokesh Kangaraj at the helm. This movie, bankrolled by Xavier Britto's XB Film Creators banner, is currently in the shooting stage. The unit is currently filming a short schedule in Chennai, after completing a lengthy schedule in New Delhi. They will next be moving to Shimoga district in Karnataka, for a schedule there. Meanwhile, there has been a request for the Thalapathy 64 team!

Archana Kalpathi of AGS Entertainment, who was the Creative Producer for Bigil, directed by Atlee, has requested the Thalapathy 64 team to give out some update on the movie. She took to her Twitter handle to pose this question and asked the Thalapathy 64 team to give some sort of update, be it the first look release date or a motion poster atleast. She also used the #LetsAskforThalapathy64Update which has now caught on and many people are using this hashtag to ask for some sort of update from the movie. Responding to this, Jagadish - the Line Producer of Thalapathy 64 mentioned that he would DM Archana Kalpathi.

Thalapathy 64 will also see Makkal Selvan Vijay Sethupathi acting alongside Vijay for the first time. Petta fame Malavika Mohanan has been roped in as the heroine and the ensemble cast of this movie includes Shanthnu, Arjun Das, Andreah, Sriman, Sanjeev, Srinath, Gouri Kishan, Lintu Rony, Brigida and Prem, among others. Rockstar Anirudh is scoring the music while Sathyan Sooryan is handling the camera and Philomin Raj is taking care of the editing. The movie is progressing rapidly and is expected to hit the screens in April, 2020! Let's wait and see if the Thalapathy 64 team gives out any official update regarding the movie...

People looking for online information on Velumurugan,,Keerthika will find this news story useful.