Actress Nora Fatehi, who is best known among Tamil cinema fans for her dance numbers like 'Door Number' in Karthi's Thozha and 'Manohari' in Prabhas' Baahubali: The Beginning, revealed on Thursday in her Instagram Story that she has tested positive for Covid-19. The 29-year-old actress penned a heartfelt emotional statement writing, "Hey guys, unfortunately I am currently battling Covid... It has honestly hit me real hard! I've been bed ridden for a few days now under doctor supervision." Nora further added, "Please stay safe guys, wear your masks, its spreading fast and can affect everyone differently! Unfortunately I have reacted badly to it, this could happen to anyone please be careful! I am working on recovering at the moment that's all that matters right now. Nothing is more important than your health! Take care, stay safe." Below is her statement: 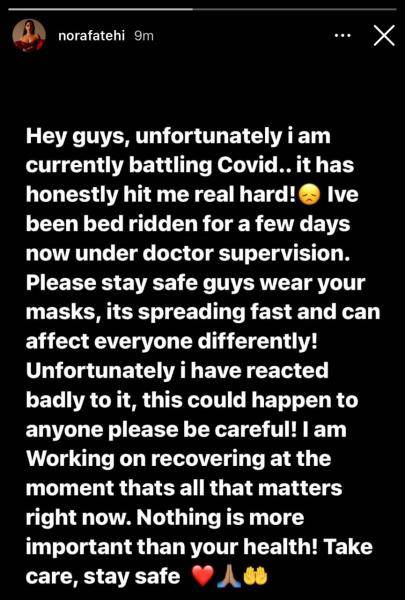 Likewise, Nora Fatehi's spokesperson also issued a statement and said the actress had tested Covid positive two days ago, with officials from the Brihanmumbai Municipal Corporation (BMC) also extending their cooperation. The spokesperson further added that a few photos of the actress in outdoor locations that are now doing the rounds on social media are old and that she has not stepped out since she began her Covid-19 diagnosis. "The spotting pictures in circulation since yesterday are from an earlier event in the past and Nora has stepped nowhere out recently. We would therefore request to please ignore the old pictures," news agency PTI reported.

Nora Fatehi, who has participated as a contestant on Bigg Boss 9 in 2015, became a nationwide sensation among the youth with her dance performance to the song 'Dilbar' from the film Satyamev Jayate. She has also made appearances in films like the Varun Dhawan and Shraddha Kapoor-starrer Street Dancer 3D, Salman Khan's Bharat, and most recently in Satyameva Jayate 2, featuring John Abraham and Divya Khosla Kumar. Nora was also cast alongside Ajay Devgn, Sanjay Dutt and Sonakshi Sinha in Bhuj: The Pride Of India, which premiered on DisneyPlus Hotstar earlier this year.