Ashwin Kumar will be making his debut as a lead actor in Tamil cinema with Enna Solla Pogirai which is currently in the post-production stages. The film is directed by newcomer A Hariharan who had earlier directed the popular YouTube series, Ctrl Alt Del. The film has two female leads - Teju Ashwini and Avantika Mishra, while Cook with Comali sensation Pugazh will be seen playing a crucial role. Enna Solla Pogirai is said to be a triangular love story that will strike a chord with the audiences, especially the youth. Enna Solla Pogirai is scheduled to hit the screens in December and the fans are just a few weeks away from witnessing this film in the theatres. An official word on the exact release date is awaited.

Meanwhile, Ashwin Kumar took to his official Instagram page recently to share an update on the progress of the film. Ashwin has completed his dubbing responsibilities and he shared the update on his Instagram page. Now that Ashwin has completed dubbing for his portions, the film is inching closer towards its release and exciting days are ahead for the fans. Enna Solla Pogirai has music scored by the popular musical duo, Vivek - Mervin who have delivered two chartbuster singles already. The recently released 'Cute Ponnu' song has turned out to be a sensational hit among music lovers and it looks like the music will be one of the highlights of the film.

Produced by R Ravindran under the banner of Trident Arts, the film has cinematography by Richard M Nathan. Ashwin has earned a humongous fan base post his participation in Cook with Comali and let us hope that his journey in Tamil cinema begins with a punch. Ashwin has already started to shoot for his second film which will also be bankrolled by the makers of Enna Solla Pogirai. For now, check out the official update on Enna Solla Pogirai, shared by Ashwin here: 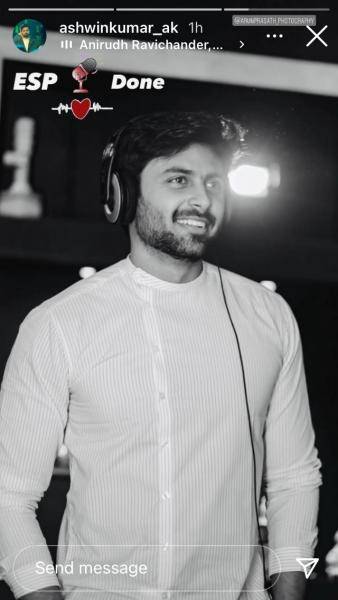 Tamil Nadu: You won't be allowed inside cinema theatres if you are not vaccinated - Breaking Decision!